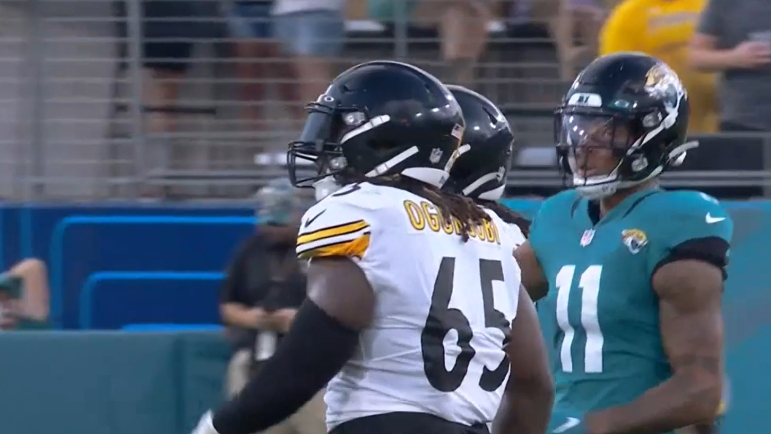 Pittsburgh Steelers defensive lineman Larry Ogunjobi talked to the media today before Sunday’s matchup against the Cincinnati Bengals, his former team. Ogunjobi said matching up against the Bengals’ offense will be a good test for Pittsburgh’s defense.

“I think it’s always good when you have a challenge, you know obviously they went to the Super Bowl last year and they have a lot of special players on that team. So I think it’ll be a great challenge for us to go out there and play Steelers football,” Ogunjobi said via Steelers Live on Twitter.

Larry Ogunjobi spoke to the media after practice about the defense, Week 1 + more. pic.twitter.com/WVfj8EZ0pe

Ogunjobi is quite familiar with a lot of the Bengals’ key offensive personnel, as quarterback Joe Burrow, running back Joe Mixon and wide receivers Ja’Marr Chase, Tee Higgins and Tyler Boyd were all impact players for the 2021 Bengals in their surprise run to the Super Bowl. However, the team overhauled its offensive line, adding offensive tackle La’el Collins and interior offensive linemen Ted Karras and Alex Cappa in free agency, while also drafting guard Cordell Volson. The guys that Ogunjobi went up against every day in practice are either no longer in Cincinnati or have been relegated to the bench after a subpar performance last season.

The skill position talent in Cincinnati is up there among the best in the league, and it will certainly be a challenge for Pittsburgh to contain them. Pittsburgh did a decent job against Chase, the reigning AP Offensive Rookie of the Year, last year, holding him to just seven catches for 104 yards in two games. Higgins missed the first matchup but put up six catches for 114 yards and a touchdown in Cincinnati’s 41-10 beatdown in Week 11 of last season, while Mixon ran all over Pittsburgh, running for 255 yards between the two matchups, including 165 in Cincinnati’s 41-10 win.

The run defense is going to be the most important factor for the Steelers in this game. It will be interesting to see how Cincinnati’s rebuilt offensive line holds up against Pittsburgh’s pass rush, but I’m not concerned about the Steelers’ ability to generate pressure.

Defending Cincinnati’s trio of receivers will be a challenge, but Pittsburgh did a fine job last year. It was the run defense that let the Bengals control the game, and if that happens again, Pittsburgh won’t have a shot. Hopefully, the additions of Ogunjobi and Myles Jack coupled with the return of Tyson Alualu will help the Steelers be better in that department this time around. If not, it could be a long Sunday afternoon in Cincinnati for the Steelers.