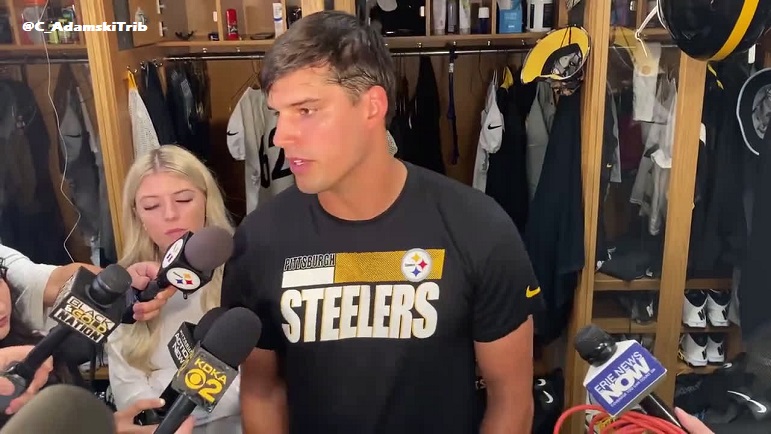 The Pittsburgh Steelers’ PR department caused quite the unintentional stir Monday, releasing the depth chart ahead of the Week 1 season opener against the Cincinnati Bengals, which had veteran Mason Rudolph listed as the backup quarterback to Mitch Trubisky, and rookie first-round pick Kenny Pickett as the No. 3.

Turns out, as head coach Mike Tomlin stated Tuesday, it was a clerical error on the Steelers’ part, which was ultimately corrected with Pickett as the No. 2 and Rudolph as the No. 3. Despite some of the hysteria that transpired on social media from media members and fans Monday, both Pickett and Rudolph knew it was a mistake and trusted the openness and transparency of Tomlin, who told the team the pecking order last week.

Pickett, who spoke with reporters Tuesday from inside the UPMC Rooney Sports Complex locker room on the South Side, stated he wasn’t worried about what was released Monday, according to video via the Pittsburgh Tribune-Review’s Chris Adamski.

“We’ve all been there. I’m sure you all have too” he said of copy/paste errors pic.twitter.com/dEIsY1CeEE

“I trust Coach Tomlin a lot, so when he told the team, I knew that it was what it was, not what was released,” Pickett said to reporters, according to video via Adamski. “I was OK. I’m sure you guys had a field day with that, but I was good with it.”

Much like Pickett, Rudolph had a similar reaction, calling the initial depth chart release “fake news” and stated to reporters from inside the locker room, again according to video via Adamski, that he appreciates how transparent Tomlin is, and knew the situation before things were released incorrectly on Monday afternoon.

“I was just telling these guys that I did [get some texts] about it, and I called it fake news,” Rudolph said, according to video via Adamski. “Coach Tomlin’s always very transparent about the decision-making process, and he let the team know that before it went out, so I didn’t care. It was all good on my end.”

That’s always been a strength of Tomlin’s, being open and honest with his players and coaches regarding high-level decisions like who the starting quarterback is going to be for the 2022 season, at least early on. As Trubisky said earlier in the day, Tomlin let the quarterbacks know the decision last week, so nothing that came out Monday was a surprise, even with the “clerical error.”

It sure was interesting to see the meltdown that occurred on social media and message boards regarding the swapped backup quarterbacks, which — for the most part — they were oblivious too, going about their business preparing for the Bengals.