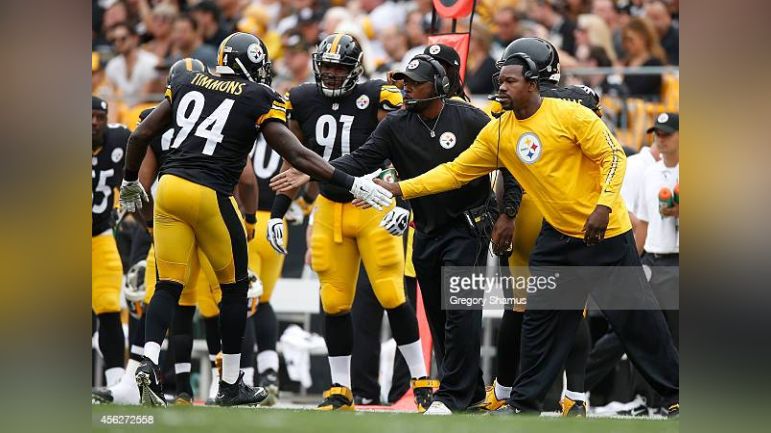 Joey Porter has found his next coaching stop, reuniting with former teammate Hines Ward to coach his XFL San Antonio team. In a press released from the XFL Tuesday morning, Porter is listed as the linebacker’s coach for Ward’s squad.

Ward is one of two ex-Steelers named one of the XFL’s eight head coaches. Rod Woodson is the other, running the Las Vegas squad.

Porter was drafted by the Steelers in 1999 and starred off the edge for the team, recording 60 sacks in 122 games (106 starts) for the team. He wrapped up his career with three years in Miami and another two in Arizona, finishing his NFL days with 98 career sacks. He was a four-time Pro Bowler, one-time All-Pro, and won a Super Bowl ring in 2005 when the Steelers beat the Seattle Seahawks in Super Bowl XL. He moved onto coaching and was hired by the Steelers in 2014, first as a defensive assistant before becoming the team’s OLBs coach from 2015 to 2018. This appears to be his first coaching stop since.

He’s not the only ex-Steeler to land a coaching gig in the XFL. Woodson’s squad has two of them in WRs Coach Ray Sherman and DBs Coach Darren Perry. Sherman was the Steelers’ OC in 1998 and came back to the team in 2019, serving as a co-receivers coach with Blaine Stewart following Darryl Drake’s death. Perry played safety for the Steelers from 1992-1998, picking off 32 passes in his time with the team.

Other coaches in the league include Tim Lewis, co-DC of the Arlington squad and former DC of the Steelers. Bruce Gradkowski has also been named OC of St. Louis’ organization. Gradkowski was a backup quarterback for Pittsburgh in the mid 2010s and has local ties, a Pittsburgh native.

The XFL is set to return next February.