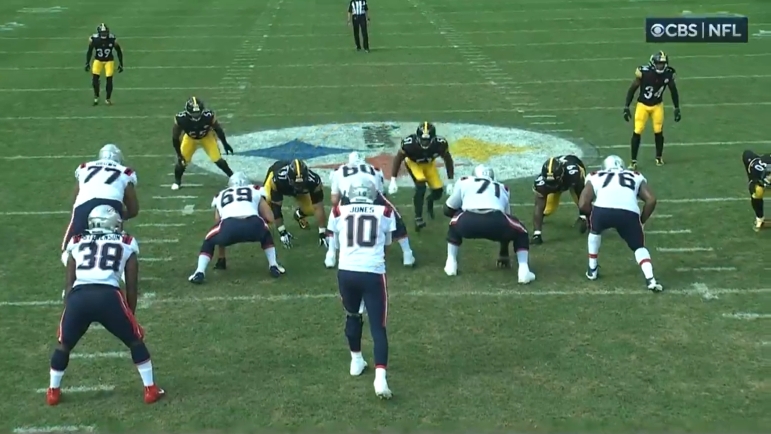 If you look at the Pittsburgh Steelers’ total 130-minute body of work thus far this season, you would have to conclude, I think, that the defense has played well, often quite well, on the whole. There have certainly been some issues, some key lapses, but a lot of teams would trade units in a heartbeat.

Still, it was concerning to watch this unit get moved around in the fourth quarter on Sunday against the New England Patriots, during which point it seemed as though the offensive line and whole team schematics were able to take over. While Pittsburgh’s offense mustered up just a pair of three-and-out drives, the Patriots authored multiple long, sustained drives in the final frame that put the game away, and which relied on churning out yards on the ground.

So what went wrong? Was it a schematic issue or an execution issue? “I think it’s probably a little bit of both”, defensive coordinator Teryl Austin told reporters yesterday via transcript. “We looked at it and we kind of identified what we will have to do if that situation comes up again, and I think we’ll have it fixed”.

They think they’ll have it fixed, at least. Will they? Truthfully, I don’t think that the short week in and of itself is that much of an incumbrance to make minor schematic adjustments in that department. You only need to look at the tape and tell your players ‘When this happens, do this’.

In other words, the short week shouldn’t be an excuse if they allow the Cleveland Browns, as excellent as their rushing offense can be, to beat them and dominate them in the same fashion as the Patriots did at the end of Sunday’s game.

“They do a good job of identifying, blocking, getting the back downhill, getting the back on the corner, where all of the sudden they’ve got everybody blocked up and [Nick] Chubb shows out there or [Kareem] Hunt shows up there outside on a corner, and they like that matchup one-on-one that way”, Austin said of one of his areas of concern preparing for the Browns’ run game.

“We’re going to have our work cut out for us, but it’s going to be all of us, it’s not going to be one guy that’s trying to carry it”.

As you would expect, the issues were multiple, and in multiple contexts. It’s not as though the Patriots were running the same play over and over again. There was a mixture of power and zone, and it wasn’t just about working on the edges either, where you might suspect that shaky crack-and-replace was to blame. There were more than enough interior runs that succeeded to get you concerned all around.

We’ll see tomorrow night how well Austin can get his group to adjust to what on paper should be an even steeper challenge than what they faced in the fourth quarter on Sunday—this time on the road against an opponent that knows them well, and on a short week.