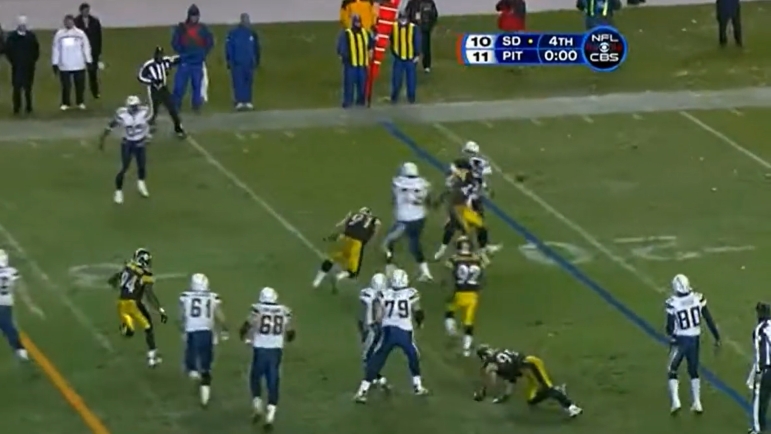 Regular readers of the site have grown accustomed to unusual statistics over the past nine years that you have likely come to expect it, even anticipate it. That is thanks to Alex Kozora, of course, and his Stats of the Weird column, which it seems other outlets are increasingly seeking to imitate.

Even his ‘weird stat’ Tweets are being picked up by larger outlets, such as one that he put up last night, so it would only be fitting if we talk about it within the wider context of an article as well. It’s about how Troy Polamalu tried but failed to ruin a Scorigami, only by virtue of an officiating error.

For those asking: refs called an illegal forward pass on – I guess? – the first lateral that killed the play. Wrong application of the rule. NFL admitted as much after.

If you saw the tweet, or recognize the header image, you already know what I’m talking about. We have to go back to 2008, back when Steelers Depot was in its infancy and years before either I or Alex were on board. The Pittsburgh Steelers were closing out an 11-10 win before Polamalu nearly did what the Cleveland Browns just did to the Steelers: score a touchdown off of a desperation lateral fumble at the end of the game.

In Polamalu’s case, he forced the fumble himself rather than it being a matter of the ball trickling out. He scooped and scored, but the officials erroneously determined that the first lateral in the sequence was in fact a forward pass, effectively blowing the play dead at that point—before the fumble occurred.

Had it stood, the Steelers would have likely won 18-10, which would have also been a rare finish, one of only seven 18-10 games in the history of the NFL, three of which have occurred after 2008. Or it would have been one of 142 games had they missed the extra point and concluded the game at 17-10. Because it was overturned, however, it became the first 11-10 final score in NFL history: a Scorigami.

It stood as the first and only in NFL history until last night when the Denver Broncos joined the mix as the victors over the San Francisco 49ers. So how did they get there? Well, it took some unusual circumstances, as you might imagine.

In fact, it took 49ers quarterback Jimmy Garoppolo doing his best Dan Orlovsky impression by stepping on the back line in the end zone as he was attempting a pass, which is a safety. Orlovsky was pumped about it, as you might imagine.

That gave the Broncos five points at that point, though. So how did they get to 11? Well, not through a couple of field goals. Instead, it was off of a touchdown run with six minutes left. They attempted to go for two to give themselves a three-point lead (a statistically wise decision), but failed, preserving their 11-point total—and one-point lead over the 49ers.

And so there you have it. It took a last-second officiating error on a defensive touchdown on the final play of the game and an incredibly rare self-inflicted safety by the quarterback to get us to this, one of the rarest scores in NFL history: the 11-10 final. Brought to you by Scott Green, the head official who acknowledged after the game that he got the forward pass ruling wrong and thus negated Polamalu’s touchdown.