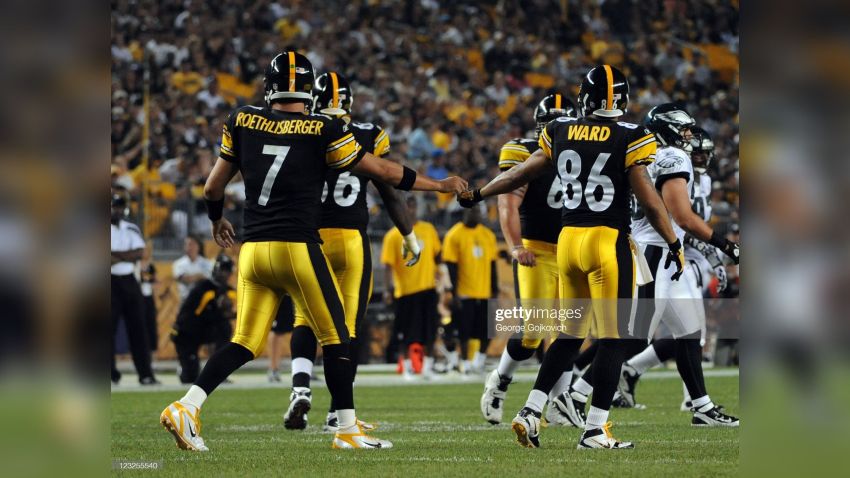 Replacing a franchise quarterback is never an easy task, or any great player. You can potentially fall into the trap of looking for players with the same qualities as the former star, whether you perceive them or the guy really has it.

Well, former Pittsburgh Steelers wide receiver Hines Ward does see a little bit of Ben Roethlisberger, his longtime quarterback, in the team’s newest arm, Kenny Pickett, the first-round pick out of Pittsburgh in 2022. Though he’s sitting on the bench right now, Ward believes Pickett has at least one key ingredient that Big Ben had.

“Just watching him throughout his whole career, man, he has a gunslinger [mentality]. He has a moxie to him a little bit that I like”, he said on the AP Pro Football Podcast with Rob Maaddi. “I want a confident quarterback that believes that he can make every throw and believes that he can win games”.

Now, who does that sound like to you? Who is it that until very recently was in Pittsburgh and who willingly, even gleefully, described himself as a gunslinger at heart—even as his average depth of target gradually dwindled to about arm’s length? The answer is Roethlisberger, of course.

“That’s the one thing about Ben, every time he stepped in that huddle, he had that look that we’re gonna win games”, Ward said. “I was like, ‘Hell, let’s go. I’m right there with you, my brother’. That’s what I think Kenny brings to the table. It’s just a matter of, you know, there’s a learning curve”.

Whether or not Pickett proves to be a gunslinger at the NFL level remains to be seen—that’s not necessarily what we saw out of him during training camp and the preseason—but one thing that we did consistently hear all along is that he knows how to command a huddle.

Now, he hasn’t worked much with the first-team offense, necessarily, partially due to a variety of availability issues. There’s also the fact that Steelers head coach Mike Tomlin consistently gave Mitch Trubisky only first-team reps. So there’s still a lot we might not know about what kind of command he can wield over an experienced group of NFL starters.

From a locker room perspective, they’re not even talking about Pickett, although they wouldn’t be expected to. They get asked questions about Trubisky and whether or not they believe in him, and of course they give the only answer that they can afford to give.

A former teammate of Ward’s, offensive lineman Ramon Foster, previously cautioned about putting Pickett in too soon, yet nevertheless, when he was asked to comment from a player’s perspective if he would be ready to roll with Pickett right now, he would say yes.

Does this starting offense feel that way about Pickett? Not what they would say in public, but in private. In the offensive line meeting rooms, would they be saying, ‘finally, we get to block for our guy’, or ‘why are they throwing a rookie in there when we’re trying to get better?’