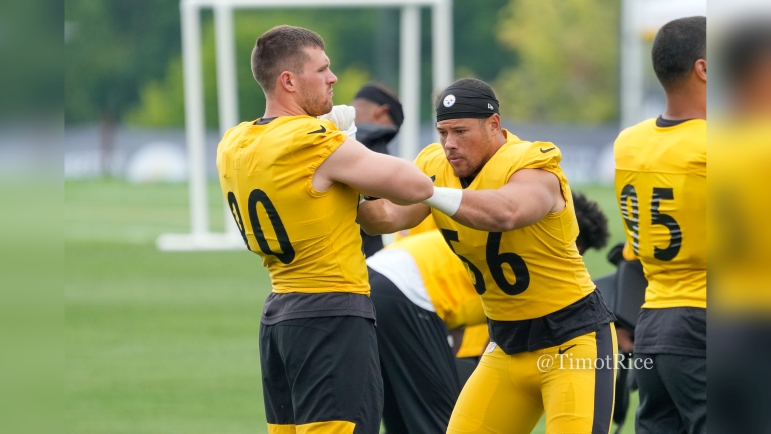 For young pass rushers around the league, Steelers star T.J. Watt is the gold standard when it comes to his relentless motor, non-stop work ethic and commitment level to being the absolute best at what he does, and deservedly so. Last season, Watt finally captured the elusive DPOY Award that should’ve been his for two, and arguably three, straight years running, as he tied the single-season sack record of 22.5 set by Hall Of Famer Michael Strahan.

On his own team, he has a young understudy in third-year player Alex Highsmith, Watt’s bookend who was inserted into the starting lineup late in his rookie season in 2019 after Bud Dupree went down due to injury and then got the payday he was looking for in Tennessee. Highsmith has performed admirably his first two seasons, posting two sacks in limited action his rookie year before notching six last year. And last Sunday, he took down Joe Burrow three times.

Having Watt as your teammate has obviously stunted the growth and development of Highsmith, as I can personally recall a time at Heinz Field last year during training camp when Watt was working individually off to the side with Highsmith on pass rush moves. But the team and Highsmith are about to find out what the defense will look like without their most important chess piece out there, as Watt’s set to miss, at minimum, the next four games.

“I think we’ve got a lot of quality guys that are going to be able to step out while T.J.’s not out there, guys like Malik Reed, Jamir Jones, [Delontae Scott], we’ve got a bunch of really good guys,” Highsmith told Steelers reporter Missi Matthews via Steelers.com. “I’m looking forward to see how they do this upcoming Sunday.”

For Highsmith, he might feel the sting of the absence of Watt more so than any other defender, just for the simple fact that he requires a constant double-team, drawing attention away from Highsmith. Not only that, the two are very close and when one usually sees Watt off the field at practice, Highsmith is usually not very far.

“He’s a guy who loves football and I know it’s killing him to not be out there. I’m just going to continue to be a sponge when it comes to soaking up information from him. Even today, we were still talking in our meeting and just talking about stuff even though he isn’t playing, so he’s still willing to help whenever I want to reach out to ask him about things.”

It’s going to take a collective effort by the whole defense to replace Watt, there’s no doubt about that. However, with the other All-Pros the defense features such as Cam Heyward and Minkah Fitzpatrick, along with the free agency pieces the team added like Larry Ogunjobi and Myles Jack, the team should be able to field a more-than-adequate unit for a few games until Watt returns. And Highsmith is going to play a huge part in that.