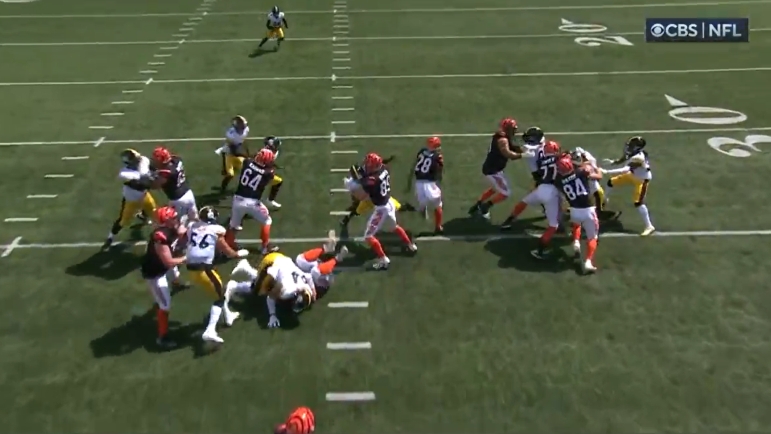 The Pittsburgh Steelers put forth an all-around solid defensive effort on Sunday in their 2022 debut, at times excellent, certainly, but not such that it should be construed as a finished product. That’s how defensive captain Cameron Heyward sees it, particularly with respect to the run game, even if they were largely effective on a per-play basis in limiting Joe Mixon for the Cincinnati Bengals.

“I think there’s room for growth. Obviously we held [Mixon] under 100, but there were a couple of big, long runs that made his average better than it was”, he said on his Not Just Football podcast yesterday. “That’s a testament to him, but we’re not in it just to let it trickle out and get one big run and hold our breath and hope we tackle him from here on out. We’ve got to do it every time we’re out there. Everybody’s got to be responsible for their gaps”.

A Pro Bowler last season, Mixon rushed for 82 yards against the Steelers on 27 attempts, averaging just three yards per attempt. They hit 133 rushing yards as a team thanks to quarterback Joe Burrow’s 47 yards on six scrambles, including a 23-yarder.

The biggest play for Mixon, of course, came near the end of the first half, with the Steelers lined up to try to stuff a 4th-and-1 dive. The veteran back was able to find the crease and he popped free for 31 yards, leading to a Bengals field goal before the half.

Now absent T.J. Watt, communication and execution will be even more important, but Malik Reed is a fairly stout run defender who knows what his assignment is. If he and the rest of the 10 on the field can just do their jobs without interfering with others, this should be a run defense much more reminiscent of 2020 than of last season.

Still, it’s hard to draw conclusions so early, either of the Steelers’ run defense or of the Bengals’ run offense. Cincinnati is breaking in four new starters along the offensive line, including a rookie at left guard who had the misfortune of having to deal with Heyward directly.

It won’t be until at least several games into the season until we can really start making more declarative statements, but there were signs of encouragement in the Steelers’ run defense in Week 1. Next up are the New England Patriots.