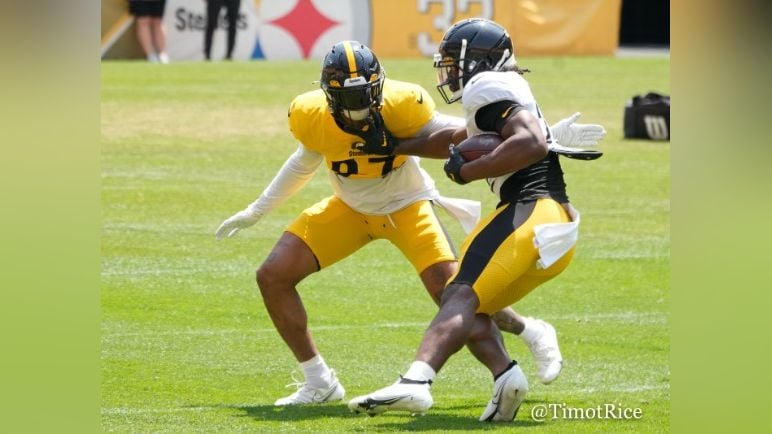 As part of Cam’ Kindness Week, Pittsburgh Steelers defensive lineman Cameron Heyward and running back Najee Harris visited the Barack Obama School Of International Studies in East Liberty, Pa. on Tuesday. While there, Heyward announced the newest location of Craig’s Closet, named after his late father Craig “Ironhead” Heyward, at the school, per Steelers Community Relations on Twitter. Craig’s Closet provides free dress clothes for high schoolers. He also announced that Craig’s Closet will be in 10 high schools in the Pittsburgh Public School District in 2030. According to Trib Live, Harris spoke to students about food insecurity, a personal topic for him as he grew up in a food insecure household.

During @CamHeyward's second stop of the day, he participated in a ribbon cutting ceremony at The Barack Obama Academy of International Studies where he announced the newest location for Craig’s Closet, which provides free dress clothes for high schoolers. pic.twitter.com/iqh4cS5LSU

It’s great to see players give back to the community in a meaningful way like this. For both Heyward and Harris to support kids in the Pittsburgh area is awesome to see out of two beloved members of the Steelers. Harris is letting kids know that it’s ok to ask for help if it’s needed, while also giving them a role model who has been in a similar circumstance. As the Cameron Heyward Foundation website says, Craig’s Closet is helping students have access to dress clothes they otherwise may not.

“We don’t want a lack of access to a suit or a dress shirt to stop someone from pursuing their dreams.”

Both Harris and Heyward are standouts on and off the field and the Steelers are lucky to have both of them. The rest of Cam’s Kindness Week will include a toy dropoff at Angel’s Place, a community for individuals with developmental and intellectual disabilities tomorrow, while Thursday is a community cleanup at the Sheridan Ave Orchard and Garden and on Friday Heyward will make a donation in support of girl’s flag football programs. The Steelers are one of 14 NFL franchises that sponsor a girl’s flag football league, and hopefully, Heyward’s donation further progresses the sport in the Pittsburgh area. During Sunday’s game, Heyward is providing sideline passes and tickets to the alumni of the Craig’s Closet program.

We’ll see if any other players are involved with Cam’s Kindness Week as it progresses, but the turnout so far has been nice to see. Heyward is doing an amazing thing, and it’s awesome to see his teammates and his head coach support him.

“Tip of the cap to Cam and all the work that’s being done with the Heyward House.” pic.twitter.com/WIGdJWFNbB