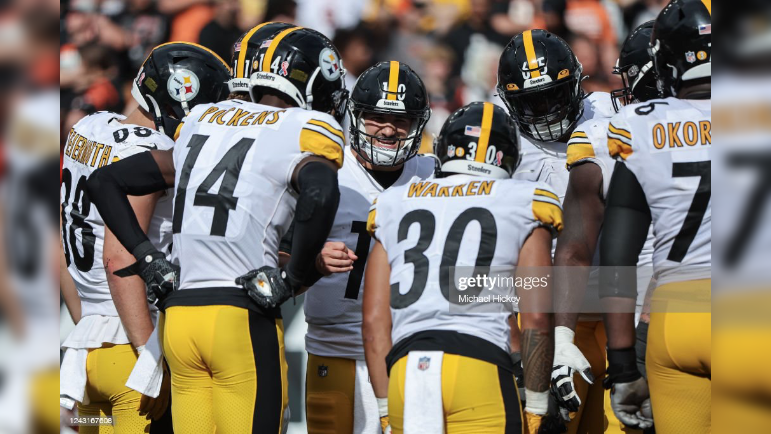 That’s what happened Tuesday during his weekly Tomlin Tuesday session with the media. Asked about UDFA running back Jaylen Warren, who was pressed into action late in Sunday’s Week 1 23-20 win in overtime, Tomlin praised the young running back, albeit in an odd way, stating that Warren “didn’t urinate down his own leg” in his first real NFL action, providing the Steelers with meaningful reps in the win.

Warren played 23 offensive snaps in the Week 1 win, with a handful of them coming late in the fourth quarter and throughout overtime after star second-year running back Najee Harris hurt his foot and was quickly ruled out of the game.

In those 23 snaps, Warren displayed high-level football IQ and determination in pass protection, putting some solid snaps on tape, earning praise from Tomlin.

“He didn’t urinate down his leg and that’s a great place to begin,” Tomlin said to reporters Tuesday, according to video via the Steelers’ official YouTube page. “You know, that’s capable of happening for a young guy. But I think that’s been indicative of him throughout this process. That’s why he’s gone from undrafted to carving out a role for himself. No circumstance has been too big for him so far. He was competitive on Sunday. Good for him and good for us.”

Talk about an all-time Tomlinism.

Good thing Warren didn’t urinate down his leg while blinking.

Film Room: Jaylen Warren Does The Little Things, Shows Why He Made 53-Man Roster

In all seriousness though, Warren showed no moment is going to be too big for him. He was prepared all week as the No. 2 running back behind Harris and knew he’d get some work, thought he didn’t know how much. Turns out, he played roughly 35% of the snaps on Sunday and needed to come up big in pass protection late in the game on the road in a hostile environment.

As Tomlin said, his performance and his ability to handle the moment is indicative of who Warren is as a young guy in this league. No moment is too big, his heartbeat is slow, and he’s confident in himself and his preparation to handle whatever is thrown at him in-game.