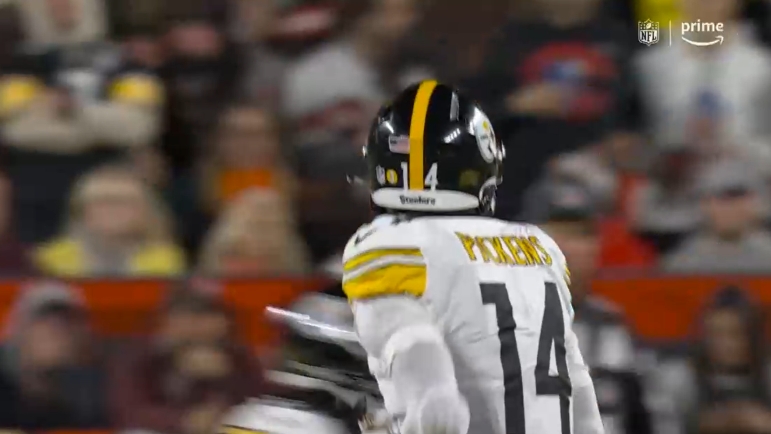 Pittsburgh Steelers wide receiver George Pickens had his best game as a pro last Thursday night against the Cleveland Browns, and while he hasn’t been very involved in the offense so far, he told reporters after practice earlier that he believes the offense can be special. Pickens said every time the offense moves the ball downfield feels like a spark that shows him it can be a special group.

“Those little nuggets are signs of it can spark at any time,” Pickens said about the moments where the offense has success. “It’s little sparks, little lightning sparks. That’s how I know that we can be a special group,” Pickens said via a tweet by Steelers Live.

WR George Pickens spoke to the media after practice. pic.twitter.com/9VrkIOIB1A

On the few occasions where the offense has had success, the group does move the ball consistently and is able to break off plays for chunk yardage. However, it just doesn’t happen nearly enough. I’m not sure I’d go as far as to say the offense can be special, but it certainly can be a lot better than what it has been up to this point.

When the offense went with tempo in the first half against Cleveland, they moved the ball with relative ease, and it led to two scoring drives. The same thing happened against New England when the pace quickened during their touchdown drive late in the third quarter that ended with a touchdown pass to Pat Freiermuth on the first play of the fourth quarter. The increased tempo might not be the answer, but so far, it’s what’s worked best for Pittsburgh.

With this offense so far, it’s felt like one step forward, two steps back. After the touchdown drive against New England, the Steelers had two drives that both ended as three-and-outs. Against the Browns, they scored three points in the second half after two touchdown drives in the first half, and the fourth quarter was rife with three-and-outs. It’s not acceptable to be as bad on third down as the Steelers are if they want to win, but the offense also just has to get a little bit more creative. Week 4 against the Jets is a big opportunity for the offense to show that they can put enough points up to win. If they don’t, with the schedule ahead of them, the Steelers could be staring down a 1-7 record when they enter their Week 9 bye.