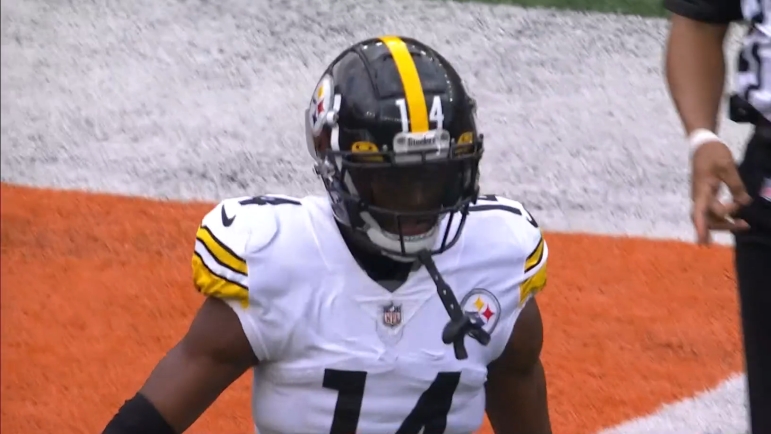 Pittsburgh Steelers rookie wide receiver George Pickens’ career officially got off with a whimper in the regular season opener on Sunday. Regardless of how many plays he might have made on the practice field, or in the preseason, his first official stat line read: one catch on three targets for three yards.

He did draw a pass interference penalty for a net of two yards about 20 minutes into the game, coming on 3rd and goal from the three-yard line, which led to the team’s first (and so far only) offensive touchdown of the season two plays later, but even if you include that, that’s a total of five yards he’s responsible for, which doesn’t exactly live up to the hype that had built up around him. Was it frustrating for him to have his debut play out so anticlimactic?

“Me personally, I probably would say yeah, for me”, he told Chris Adamski of the Pittsburgh Tribune-Review yesterday, even if his priority wasn’t on his own numbers. “But as a team, our objective and goal, we won. So I wasn’t even down on myself, and it was my first game so I was just really glad we got the (win)”.

That is an entirely reasonable response, I think, especially given that he was specifically asked if it was frustrating to be limited to just one catch for three yards in his debut. Considering the fact that he had already been turned into a meme on the day he was drafted, and was exalted for his first preseason touchdown, the expectations were set sky high for him.

Of course, one game is one game. Pickens’ career has hardly even begun. He could very easily go off for 100 yards tomorrow and nobody would spend any time thinking about his three-yard catch in the opener. And he wouldn’t be the first notable Steelers receiver with a quiet debut. JuJu Smith-Schuster wasn’t even targeted. A week later he caught a touchdown. And the rest of the year just kept getting better from there.

One might be inclined to be concerned about Pickens feeling the need to ‘press’ to start making plays, considering he entered the regular season pretty much as the favorite to win the Offensive Rookie of the Year Award and currently ranks 20th in receiving yardage by rookies.

But I don’t think that’s really his personality. He’s not going to ‘ride the emotional rollercoaster’ based on things like that. Sure, he’ll play with emotion, sure—he’s already documented as a trash talker on the field, even in practice—but does he put that kind of pressure to perform on himself, any more than is already there? I somehow doubt it. The catches will come, and with it not just the yards and the touchdowns, but the attention and accolades as well. The game-one stat line will become the answer to  a trivia question and little else.