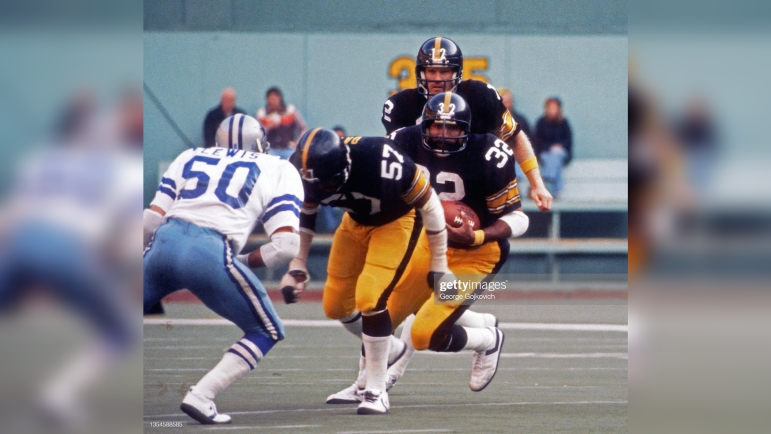 The Pittsburgh Steelers, prior to yesterday, had only retired two jersey numbers in franchise history, and the second one only came very recently, for the single-most iconic and most important player to ever wear the black and gold, Joe Greene.

Many thought that they might stop there, but on Tuesday, announced that they would be retiring the number 32 jersey of Hall of Fame running back Franco Harris, who certainly left his own indelible mark on the history of the franchise.

While he will be forever identified as being synonymous with the Immaculate Reception, Harris, a first-round pick out of Penn State in 1972, had a remarkable career that spanned a dozen seasons in Pittsburgh, after which we don’t need to talk about what happened.

But for as great as he was individually, he refused to see it as merely an individual honor. “I’ve got to look at it really to honor my teammates, also”, he told Craig Wolfley in an interview posted yesterday on the team’s website, who was his teammate. “You were a part of the offensive line, so thank you. And thank all of my teammates. Great ball players and great people”.

From 1972 through 1983, Harris compiled 11,950 rushing yards as a member of the Steelers, scoring 91 touchdowns on the ground. He also caught 306 passes for 2284 yards and another 9 touchdowns, giving him 100 career scores in the regular season. That still ranks tied for 23rd all-time in NFL history, and was the fourth-most at the time that he retired.

The NFL Offensive Rookie of the Year in 1972, Harris made the Pro Bowl in each of his first nine seasons, and was a three-time All-Pro, as well, in addition to a four-time Super Bowl champion, the last of which is of course the ultimate team accomplishment. But he was vital to those title runs.

In 19 career postseason games, Harris rushed for 1,556 yards and 16 touchdowns, adding another 504 receiving yards on 51 catches and one very important touchdown. His 17 postseason touchdowns still rank fourth in NFL history, and was the best mark at the time of his retirement.

He is, of course, right to acknowledge his teammates, many of whom are with him in the Hall of Fame, including quarterback Terry Bradshaw, wide receivers John Stallworth and Lynn Swann, and center Mike Webster from his offensive side of the football.

But there’s a reason that his number specifically is being retired, and that reason certainly goes beyond on single 60-yard fluke, even if it was a momentous turn in the franchise’s history. He was one of the great players of his era, and it’s only fitting that his number should forever be associated only with his name in the black and gold from now on.