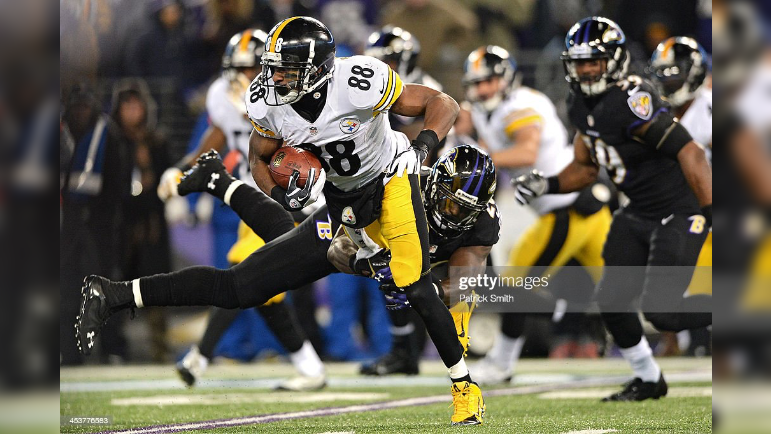 Throughout much of his 12-year career in the NFL, Emmanuel Sanders was often overlooked and undervalued nationally. That didn’t stop him from producing at a high level time and time again.

That production is coming to an end though, as Sanders announced his retirement Wednesday, signing a one-day contract with the Denver Broncos to retire in the blue and orange.

Emmanuel Sanders has announced he has retired from the NFL and will retire as a Bronco.

Originally a third-round pick (No. 82 overall) by the Pittsburgh Steelers in the 2010 NFL Draft, Sanders was part of the Young Money Crew wide receiver trio with Mike Wallace and Antonio Brown that lit up scoreboards each and every week with quarterback Ben Roethlisberger. In four seasons with the Steelers, Sanders finished with 161 receptions for 2,030 yards an 11 touchdowns. He also played a key role on special teams, returning 41 kickoffs for 1,016 yards and 16 punts for 175 yards in the black and gold.

Sanders put up a career-high 67 receptions for 740 yards and six touchdowns in 2013, which happened to be his final season with Pittsburgh.

After four seasons with the Steelers, Sanders left to sign with the Broncos in free agency, going on to reach the Pro Bowl in two of his first three seasons in the Mile High City in 2014 and 2016. During his time in Denver, Sanders also helped lead the Broncos to the Super Bowl 50 over the Carolina Panthers.

“I gave it my all. Every single rep, every single play, I tried to go 100 percent as hard as I can. And that’s why I can hang my hat and say I gave the game everything I had and the game gave it back to me.”@ESanders_10 announces his retirement as a Bronco: pic.twitter.com/q1QTmy673s

Following his six-year career in Denver, Sanders went on to spend time with the San Francisco 49ers, New Orleans Saints and Buffalo Bills, finishing his career last season in Buffalo, where he hauled in 42 passes for 626 yards and four touchdowns, showing he could still be a serviceable WR2-3 at 35 years old.

Prior to his lone season with Buffalo, Sanders raised the possibility of returning to the Steelers as a free agent, telling former The Athletic Steelers beat writer Ed Bouchette that he’d “love” to re-join the Steelers. However, his frosty relationship with former quarterback Ben Roethlisberger likely blocked that possibility after Sanders bashed the Steelers’ star quarterback in recent years, calling him a bad leader and a jerk.

Emmanuel Sanders on #Steelers Ben R. calling out WRs on his radio show this season: "To me, all of that is disrespectful. I would take all of that as disrespect." pic.twitter.com/VW4I9zRaZM

In Sanders’ first training camp with the Broncos, he burnt the bridge with Roethlisberger (and likely the Steelers), saying that then-Broncos quarterback Peyton Manning was a “far better leader” than Roethlisberger and “this is the first time that I had a quarterback that stays every single day after practice” among other comparisons he made between the two.

Of course, there may have been some frustrations with the Steelers’ organization at the time too, as the Steelers didn’t offer Sanders what he was looking for in free agency, turning down Pittsburgh’s three-year offer with limited guarantees and base salary for a larger deal in Denver.

In the end it worked out for Sanders, who went to two Pro Bowls and won a Super Bowl. Now he’s retiring, capping off a terrific 12-year career as a third-round pick. Hats off to Sanders, and hopefully he’s able to return to Pittsburgh in some fashion for a celebration in the future, even if he decided to retire as a Bronco and will always be identified as one moving forward.