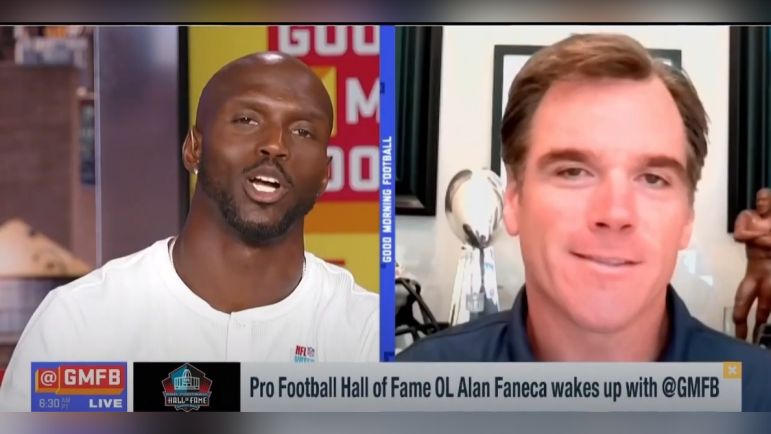 Steelers offensive coordinator Matt Canada certainly has been in the crosshairs the last few days, as calling the unit anemic through the first two games would be putting it mildly. In Sunday’s loss to New England, the team could only muster 243 total yards, after producing 267 yards in Week 1 against Cincinnati. Sunday, Mitch Trubisky routinely failed to find wide open receivers, and on an offense featuring the skill position talents that Pittsburgh has, this isn’t going to go over well with the Steeler faithful.

In fact, the chants for first-rounder Kenny Pickett were loud and clear, and earlier this morning the panel on NFL Network’s Good Morning Football had former Steeler and Pro Football Hall of Famer Alan Faneca on the show. Naturally, the Steelers and their glaring issues were brought up, and Faneca didn’t mince words.

“I get the excitement of the Steelers fans, the number one draft pick, hometown quarterback, they’ve been sitting there watching him do what he did at the University of Pittsburgh,” Faneca said on GMFB. “For me, I look at it and I see that it’s more of an offensive problem than a QB problem right now. I think they need to find out who they are on offense more than they need to find out whos directing the offense.”

The offense looked eerily similar to the one piloted by the now retired Ben Roethlisberger the past few seasons, with the passes being dinked-and-dunked seemingly laterally, without much emphasis at all on the deep shots. With talents like Diontae Johnson, Chase Claypool and rookie George Pickens, not to mention second-year tight end Pat Freiermuth, this offense should be humming along at a much higher rate than what it currently is, and Faneca agreed.

“They need to expand the field. When you play on a short field, bend don’t break, get them in the red zone, and things get harder to do. But if you’re playing that way on the whole field, you’re not doing yourself any justice and it’s making the game harder for yourself. I think that’s their biggest problem right now, I think they need to figure that out then we can start worrying about whether it’s time for Kenny Pickett or not.”

Pickett is clearly the future at the position, as the team wouldn’t have invested a first-round pick in him if that weren’t the case. It will be interesting to say how this scenario plays out, as the team obviously has a short week with the Thursday night game against Cleveland a mere 24 hours away. The team’s defense almost single-handedly won the game for Pittsburgh in Week 1, tallying seven sacks and four interceptions. A major asterisk to that though is that it was played with the reigning DPOY T.J. Watt in the lineup. Without him against New England, the teams’ pass rush crashed to a screeching halt, not producing a single sack of Mac Jones.

With Cleveland on the horizon, it’s a chance for the Steelers to wash the bad taste of Sunday’s loss out of their mouths. Because as miserable of a loss as it was, the Browns’ loss was even more devastating, as they blew a 13-point lead in the final two minutes of the game, losing to the lowly Jets. The two teams certainly don’t like each other, and there should be plenty of extracurricular activity going on tomorrow night. It’ll be up to the Steelers offense as to whether they can execute better to help support a Watt-less defense, as the Browns will likely rely on their two-headed running back monster of Nick Chubb and Kareem Hunt to try and grind the team into submission. And like Faneca said, it’s another chance for the team to try to right some of the wrongs that they’ve exhibited thus far. If not, the public outcry for the firing of Canada, as well as the chants for Pickett, will only grow louder.

“Rivalry game, two cities that hate each other more than the teams hate each other. Two teams that are still trying to find themselves a little bit, it’s going to be exciting.”