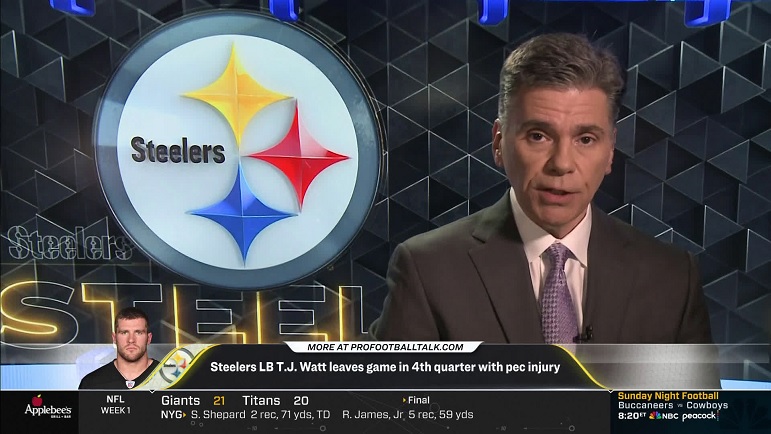 I don’t want to get anyone’s hopes up as to T.J. Watt’s future. Monday will be the critical day when Watt undergoes a MRI and gets official, final results of the pec injury he suffered Sunday against the Cincinnati Bengals. But there could be a glimmer of optimism. According to PFT’s Mike Florio, the Steelers are holding out hope Watt suffered only a partial pec tear, meaning he could return later this season.

Here’s what Florio wrote a short time ago.

“Per a league source, the Steelers are holding out hope that it’s only a partial tear. That would allow him to return sooner, obviously, than if it’s a full tear.”

That’s still not a lot there. Elsewhere in the post, Florio himself admits tomorrow’s tests will give Pittsburgh concrete answers as to the extent of Watt’s injury and how much time he’ll miss. This might just be Pittsburgh’s wishful thinking as opposed to the Steelers having tangible reasons to believe Watt’s tear isn’t season-ending.

Of course, even if Watt *only* suffered a partial tear, he’s still going to miss a good chunk of the season. It’s hard to put an exact timetable to it but safety Miles Killebrew suffered some sort of pec injury on the first day of training camp and missed roughly a month of game action Again, we don’t know the exact nature of Killebrew’s injury nor do we know Watt’s exact status but even good news would likely keep Watt out for the next 4-6 weeks.

Watt suffered the injury late in Sunday’s win over the Cincinnati Bengals. He looked in obvious discomfort and appeared to mouth the words “I tore it” to trainers as he walked to the sidelines. Instead of being checked out in the medical tent, Watt immediately walked into the locker room and was quickly ruled out after.

For however long Watt is out, Malik Reed will replace him at OLB with Alex Highsmith – who had three sacks – becoming the team’s top EDGE rusher. Jamir Jones would become the team’s #3 and rotational OLB.

We’re likely to get word sometime tomorrow as to what doctors discover when Watt undergoes his MRI. Anything other than a season-ending injury should be treated as good news but a partial tear seems like a best-case scenario. Check out our article Dr. Melanie Friedlander wrote outlining Watt’s injury.

The Doctor Is In: Can T.J. Watt’s Season Be Salvaged?