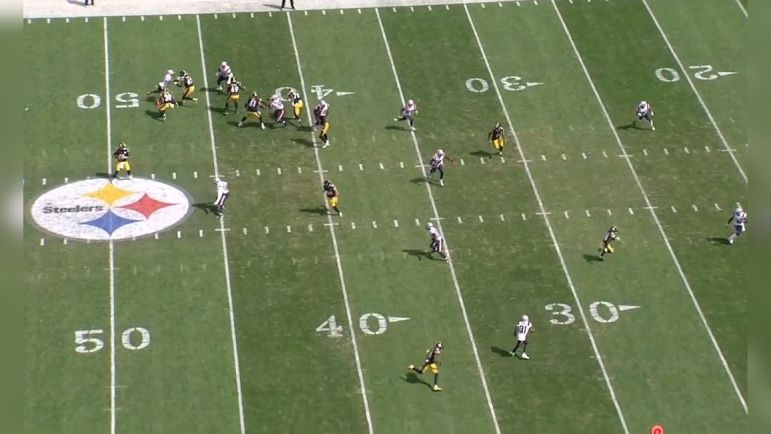 As we always do every week, I went through the All-22 tape last night, going over the Pittsburgh Steelers’ offense to figure out why it’s stuck in the mud. There’s a lot of reasons for that and I’ll have a video tomorrow that breaks down specific issues a bit more. But one overall takeaway stuck out in a major way.

The Matt Canada offense is boring. And frankly, pretty predictable.

I’m generally one to loathe the term. Predictable. The catch-all used by fans for every offensive coordinator and a term that often meant…nothing. Nothing specific anyway. But watching the Steelers against the Patriots was like watching Groundhog Day. The same stuff over and over again. Total déjà vu of, I’ve seen this before.

Here’s a cut-up of basically what the Steelers’ passing game looked like against New England. In short, it was a limited number of the same concepts with very little variation in personnel, formation, or alignment to at least make things look different. A breakdown of the concepts Pittsburgh ran over and over in the Week Two loss.

One of Canada’s favorite calls of the day. Yankee concept with two receiver running crossing over routes with a deep post route added in. All three result in Trubisky checkdowns, which really begs the question of why they kept being called. I’m not going to debate or get into the reads as much here, I’ll talk about that in a video tomorrow, but this call was run over and over and ultimately wasn’t very effective as designed.

And maybe more than three. One of Canada’s favorite calls on early downs in his own territory, this play has different aspects to it as the word “option” implies but they generally haven’t been successful. A sorta broken QB run by Trubisky was the highlight here.

In fact, run on back-to-back drives on back-to-back third downs. The first play is a terrible read by Trubisky, his worst play of the day, clearly missing Claypool on the out despite him being the primary read here. Takes a sack instead and potentially costs this team a touchdown. Canada goes back to it a second time and Trubisky hits Claypool for the first down.

But only run well once. Bad ready by Trubisky not to hand the ball off the first time, resulting in a tight-coverage throw and penalty for ineligible man downfield on RG James Daniels. He hands it off the second time for a good gain.

Same look here both times. 3×1, fake the split zone action, with Pickens going in motion to the right pre-snap. Lo-hi read with Trubisky hitting Pat Freiermuth in the flat the first clip. It’s the correct read and throw. But Canada saw Pickens get open on the wheel so he comes back to it a short time later out of the same look. The Patriots aren’t fooled and Pickens – and the flat – are taken away and Trubisky eats the ball for a sack.

Canada’s attempt to get the team into 3rd and reasonable and to his credit, he did his job here. Half-roll to hit Claypool, #2, in the flat running a speed out. Used on 2nd and long both times here.

Both in “medium” situations, needing 4-5 yards. Mesh concept with two underneath crossers and TE Pat Freiermuth on an option route, running away from man coverage the first clip and settling against zone in the second clip. First throw is incomplete, second Trubisky settles on the checkdown to Harris, facing zone and the mesh not effective against it.

3×1 formation, same look each time, though different down/distances and areas of the field. #2 Claypool running down the seam with #1 Pickens running the deep in-cut. Claypool takes a bad outside release in the second clip and it’s the reason why he and Pickens get caught in the same area.

Good route and completion to Johnson backside on the first example. Checkdown in the second.

For the purposes of this article, I’m not going to get hyper-focused on the reads and decisions. The overall point and takeaway is that Canada’s offense is very simple, very structured, and overall uncreative. Inherently, running a limited number of concepts isn’t always bad. But Canada doesn’t dress up the same concepts in different ways, giving defenses the same looks over and over. Same groupings, some formations, a lot of the same pre-snap motion. It’s an easy offense to digest, understand, and scout with clear tendencies put out on tape, both in-game and for future opponents.

Canada is running the Steelers’ offense the way he had in college. Rigid, structured, and ultra-simple. In college, that might’ve worked. It’s a different story when you’re working with a 20 year-old quarterback at Maryland who has to play within that structure versus a NFL veteran at the game’s highest level. In a word, this offense is limited, and the Steelers don’t have the advantage of a great talent gap like you might get in college on the NFL level. It’s my biggest takeaway of this offense and given the results, my biggest problem.