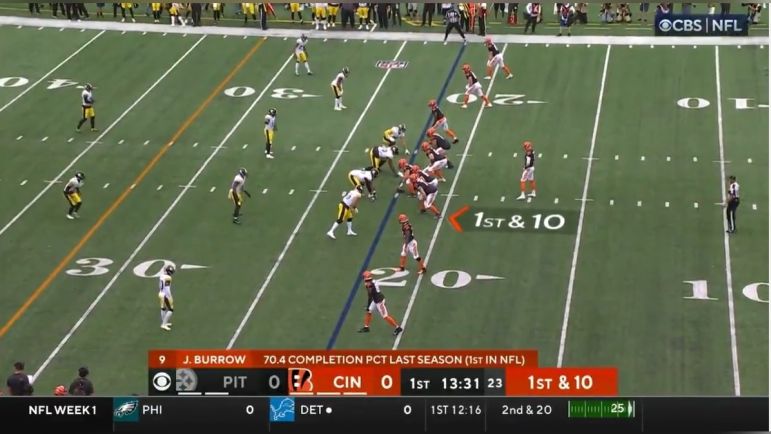 The Pittsburgh Steelers came into Sunday’s opener with 25 players on their 53-man roster. For the game against the Cincinnati Bengals, 23 of them dressed. And over the course of the overtime contest, Pittsburgh employed a whopping 21 of them on defense for at least one snap, CB James Pierre and ILB Marcus Allen the only exceptions. Minkah Fitzpatrick, Terrell Edmunds, and Ahkello Witherspoon played the most snaps, 100 of 100, while Miles Killebrew saw the fewest with just one.  Including plays negated be penalty, here’s the snap count for each player:

Pittsburgh had options and took advantage of it. Their traditional groupings are well understood: base 3-4, nickel, and dime defense. But the Steelers added more layers than that with multiple different personnel groupings and alignments. Let’s take a look at them.

The “big nickel” is what I refer to as the team’s three-safety package combined with their 2-4 front, two down linemen and four linebackers on the field. Something they used with Damontae Kazee this summer prior to his wrist injury. The team kept the package and replace Kazee with Tre Norwood as the third safety. 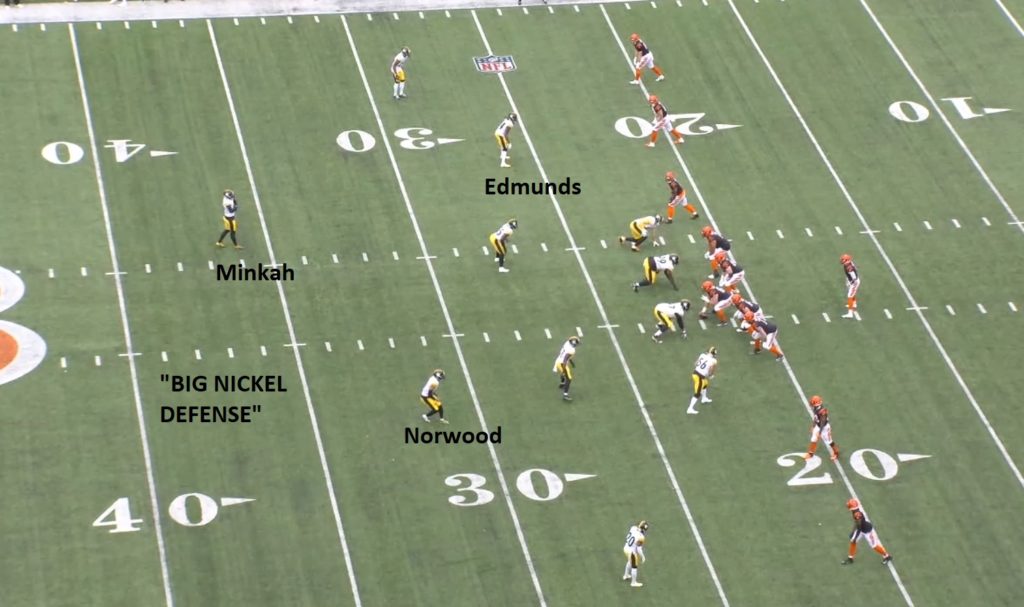 These “big” packages come against heavier/run-focused sets. And while it’s a little strange to remove a down lineman here, it’s often used against teams that have threats at tight end, mixing run defense with defending the play-pass game or when teams try to go heavy and spread the field out with empty sets, like the Cleveland Browns have successfully done for years.

Overall, it worked well, allowing just one play to gain more than three yards. A grouping they’ll likely use forward against teams like the Baltimore Ravens, New England Patriots, and Browns.

When Pittsburgh unveiled its “big” package last year, it came as an extension of their base defense. This was their 3-4 front with three safeties and one corner instead of two corners and two safeties. Here, Miles Killebrew replaced Cam Sutton as the third safety, the bigger run stopper over Norwood. 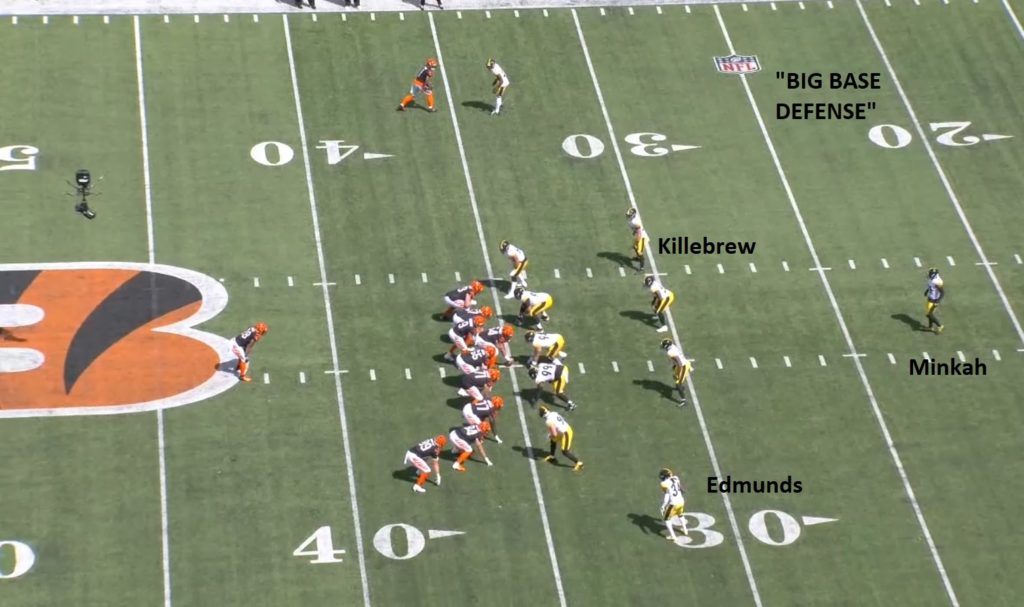 But Pittsburgh’s plan didn’t work and Joe Mixon burst up the middle for a gain of 31. That was the only occasion Pittsburgh used their big base defense. It’s worth noting the deciding factor in big base versus big nickel comes down to how many receivers are on the field. In 13 personnel, there’s only one receiver, so the team only needs one corner and they can use big nickel. In 12 personnel, there’s still two receivers, so they keep both on the field and use nickel.

Get asked each offseason about the 3-3-5 and we saw some of it against the Bengals, all coming on one drive in the third quarter. Three down linemen, three linebackers, five in the secondary (three corners, two safeties). 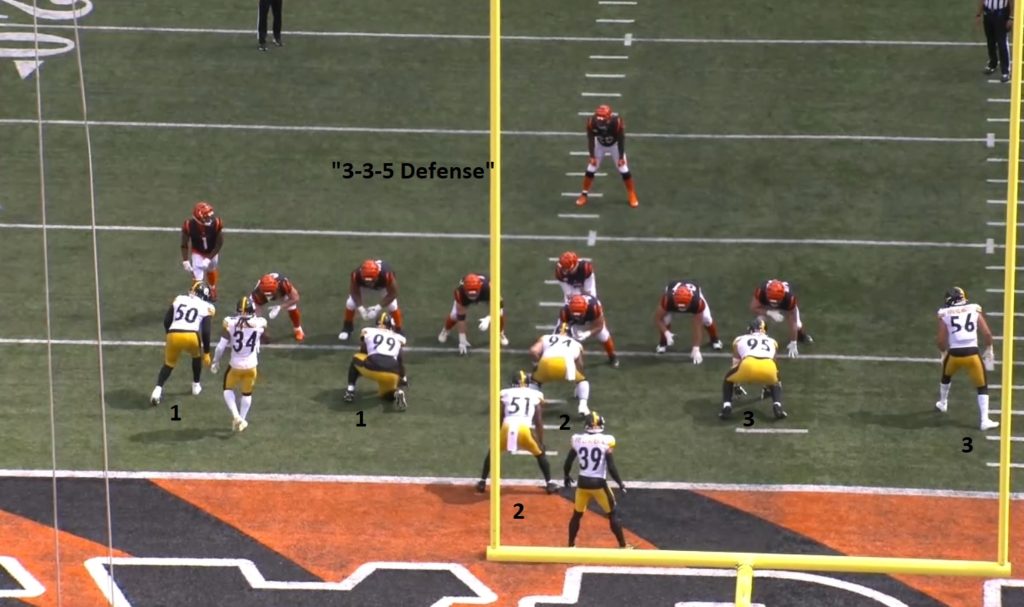 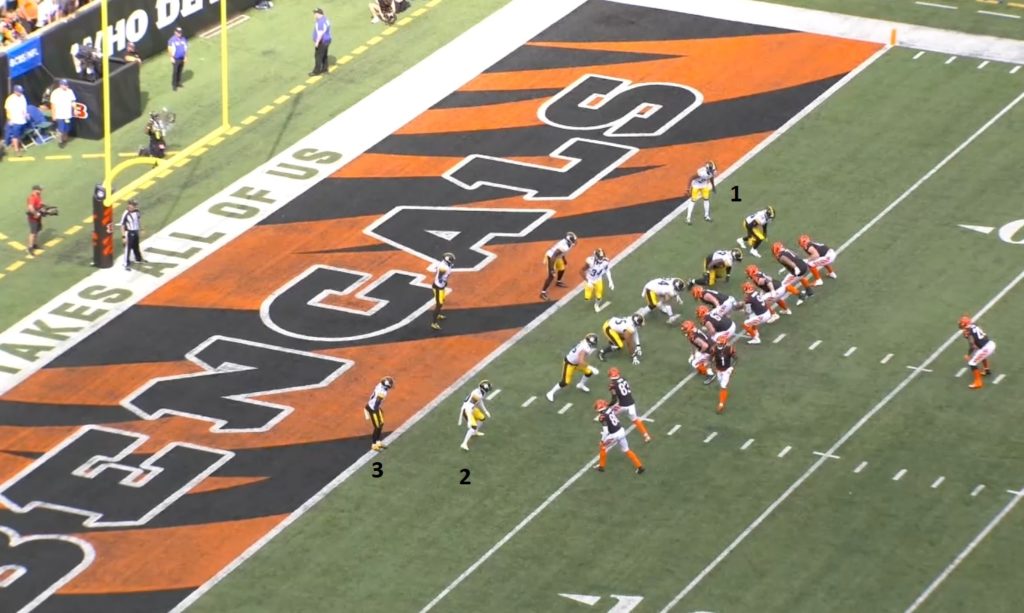 The intent here is to be the best blend of run defense and coverage. Three corners to cover the three receivers on the field, three down linemen to anchor against the run. This is a specialty package used in the low red zone. All three snaps came inside the Steelers’ five yard-line. The touchdown was the throw from Joe Burrow to Tyler Boyd.

To an extent, this is more of a front change than a totally different grouping compared to the 3-3-5. So it’s fair to say this defense was used a total of five snaps. But there are two key differences. The defensive front is shifted to an over look. And in the second time they used it, after T.J. Watt went down, they used two ILBs and one EDGE rusher (Alex Highsmith) instead of two EDGE rushers and one inside linebacker (Myles Jack) in the first example. Here’s what each looked like. 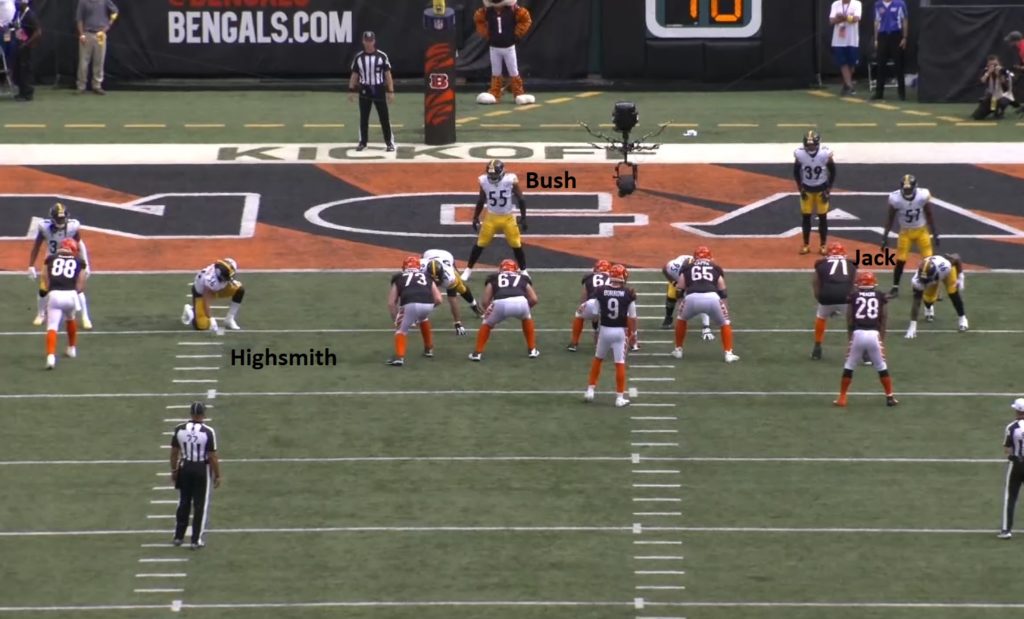 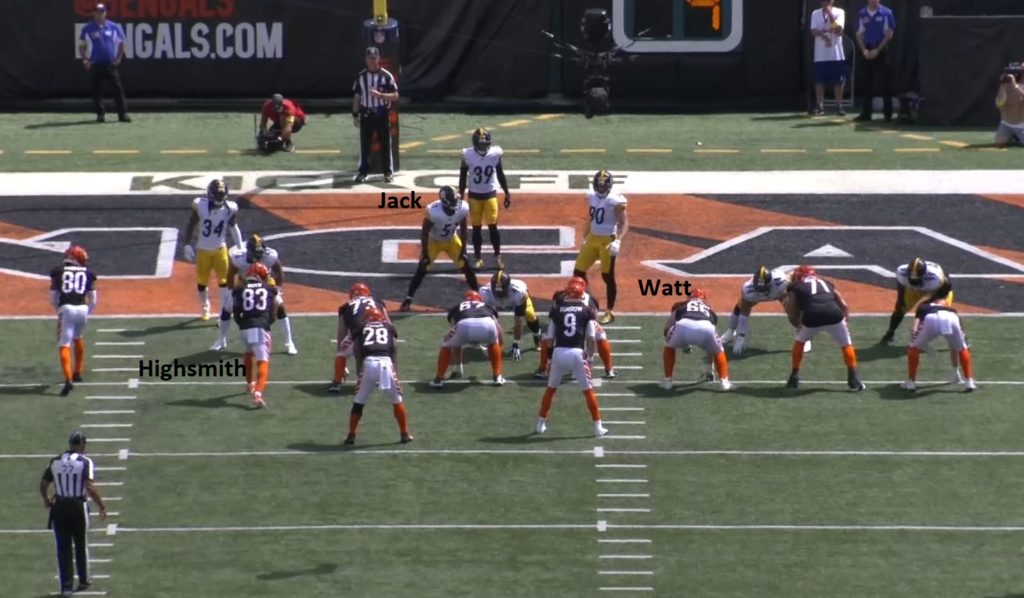 With Watt out of the lineup at least a month, it’s possible leans on this package with two ILBs on the field a little more often in order to maximize the talent and depth they have along the defensive line.

Truly an all hands on deck game for Pittsburgh. When you’re on the field for 100 snaps and reliant on your defense to make plays, everyone has to play their role. This defense did and it’s why they’re starting the year 1-0.