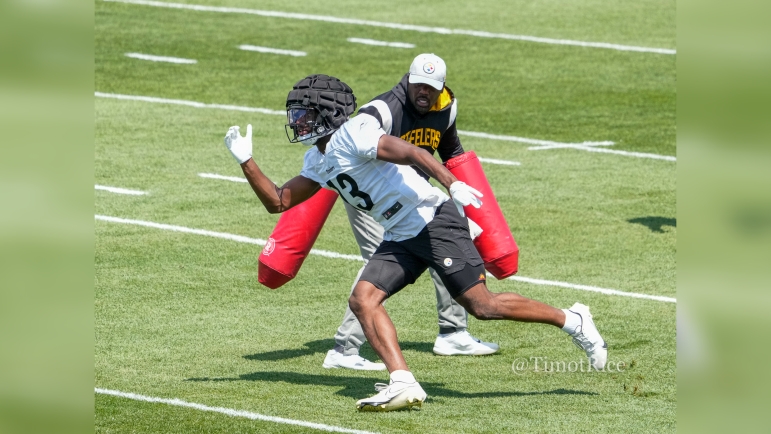 Miles Boykin is one of seven receivers to make the initial Pittsburgh Steelers’ roster. An offseason waiver claim with height/weight/speed ability similar to Chase Claypool, Boykin earned his spot primarily through special teams. After a quiet beginning to camp, Boykin came on strong and the old adage is it isn’t how you start but how you finish is what got Boykin on the 53.

Special teams is the one phase of football that’s extremely difficult to evaluate during training camp practice. Unlike offense and defense, where the Steelers can run a full-contact 11v11 session, they don’t work special teams the same way. It’s often done in skeleton work, conducting different aspects of special teams each session. And there’s a lot of them: field goal block, field goal protect/kick, punt return, punt protect/kick, kick coverage, kick return, and specialty situations. You can break that work down into even more specialized parts and drills and the Steelers do, rarely bringing full units together and never conducting any live-contact (except during the 2020 COVID year where the preseason was cancelled).

So for the new and unproven players trying to cut their teeth there, what you do inside stadiums is the homework and the test. In three games, Boykin shined. What most impressed me was his working as a gunner when viced. Meaning, there are two defenders, known as jammers, blocking him on the outside. Numbers work in the defense’s favor, 2v1, all bunched together right on the line of scrimmage. It’s the toughest position for a gunner to be in and most struggle to work free and get downfield. Not Boykin.

Here’s three examples of Boykin beautifully beating the vice, one in each game. First one is in the opener against Seattle. Boykin to the top, RB Anthony McFarland to the bottom. Both gunners are being viced. Watch how much better Boykin does than McFarland. He starts with an inside release and rips through the inside jammer. The outside jammer tries to make contact but Boykin swipes his hands down and breaks to the outside. Boykin’s broken through the vice and is in open grass with the jammers trailing him. From there, Boykin is a harder target to hit, it’s more difficult to move a player running than if he’s stationary, and Boykin works hard to fight through contact the whole way down and eventually split the two of them.

He’s not involved in the tackle but stayed on course, generally helped keep contain, and broke through the jam. McFarland? He never even crosses midfield and is stuck the entire way.

Next example against Jacksonville. Boykin to the bottom. He again stays clean, releasing outside and being nudged to the sideline. Jammers aren’t allowed to make contact and push a gunner when he’s out of bounds and the gunner isn’t allowed to run the whole way down the sideline. He must make a quick effort to get back inbounds. But releasing outside and forcing the jammer to back off does help Boykin build up speed and he splits the jammers as he veers back inbounds. He’s clean the rest of the way, chases the ball hard, and helps chip in on the tackle thanks to overall good coverage by the punt coverage team.

To his credit, James Pierre to the top also does a very nice job here.

Last example this past weekend against Detroit. Really good rep. Explosive inside release, splits the jammers by swimming over, and stays clean as he sprints downfield. He doesn’t make the tackle but crucially contains and pins the punt returner to the right side between the numbers and the sideline. Similar to an OLB setting the edge, Boykin turns the returner to a more confined space and the return goes nowhere, actually losing a yard.

Just like a wide receiver beating press coverage, a good gunner needs to beat the press of the jammer. This can be harder when there’s two but Boykin translates those receiver traits to special teams. You’ve seen him use rips and swipes to get off the line, just like he would as a receiver, while even incorporating swims, looking like a pass rusher off the edge. His initial burst off the line is crucial. He’s decisive and explosive, not foot-firing and trying to fight through both guys. He most often tries to split them or go inside/outside and his athletic traits, his size and speed, are assets.

Some other photos to illustrate the point. Boykin consistently got downfield quicker than the opposite gunner. Examples: 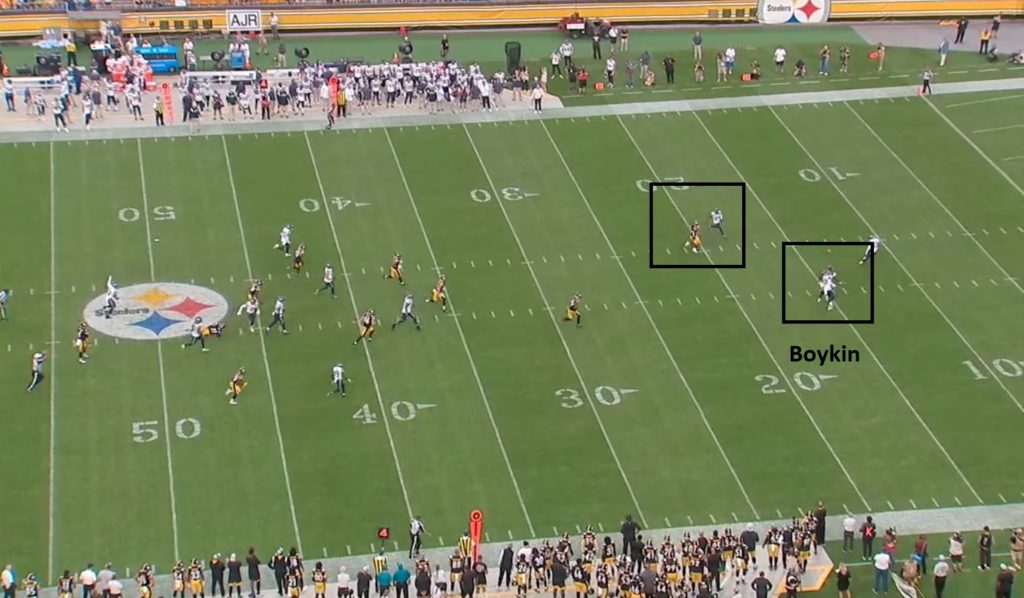 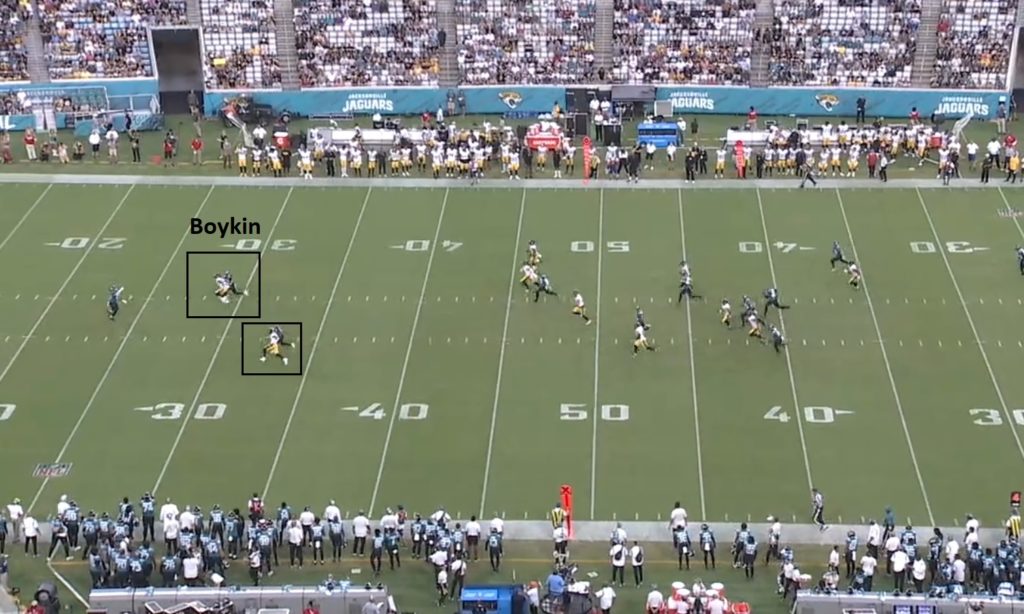 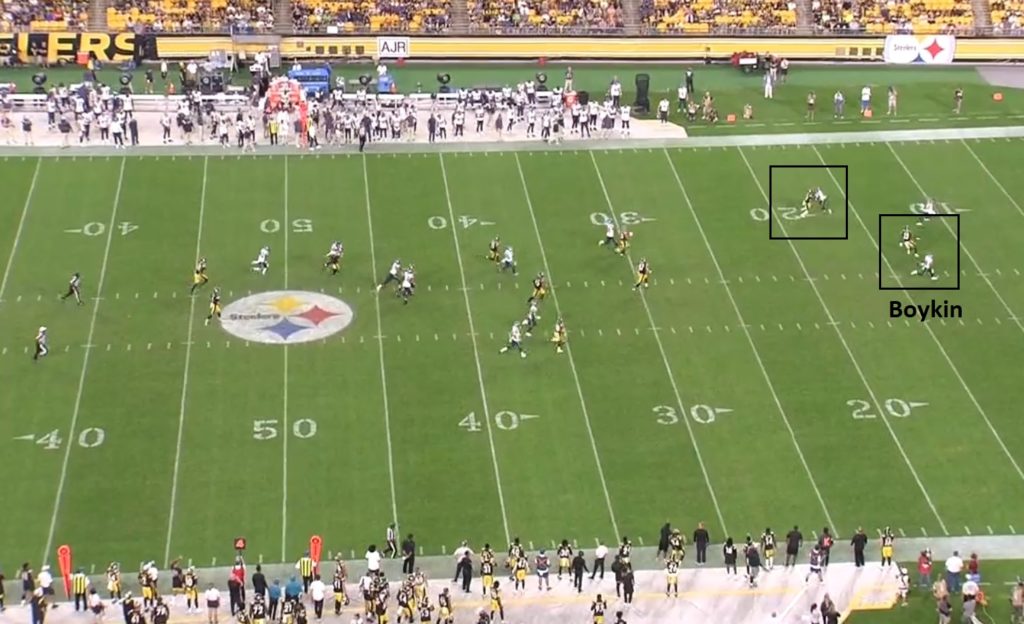 Boykin was routinely the first man downfield, viced or against a single jammer. Others on this unit struggled. We mentioned McFarland’s issues against the vice above. Against Jacksonville, Cody White had the same issue, getting stopped up and never getting downfield. Jammers did their job and the Steelers lose on of their contain guys. 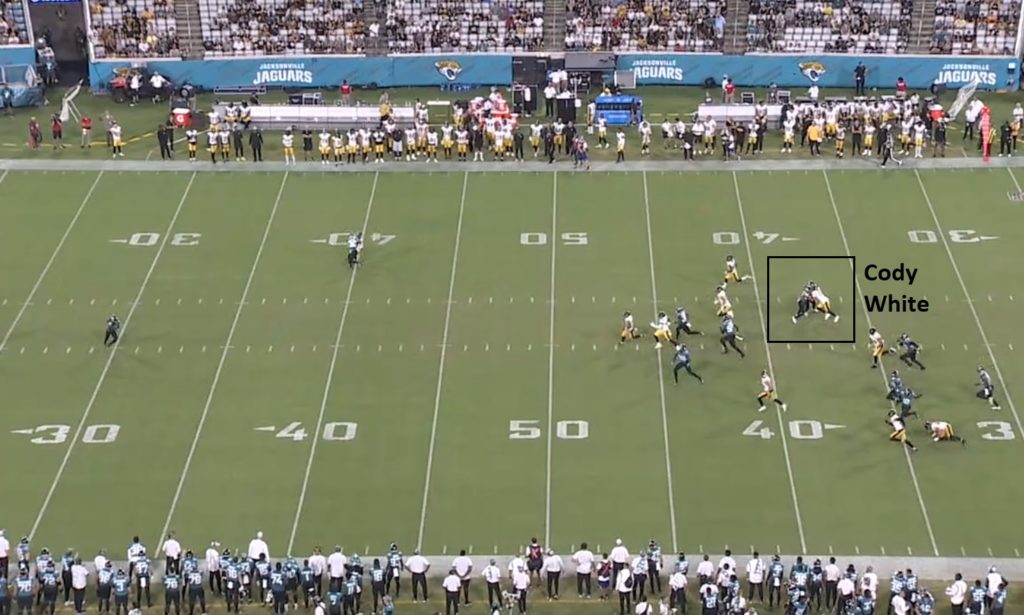 Boykin was easily the team’s best gunner this year. That helped cement his spot on the roster and he should open the year the starting gunner opposite CB James Pierre.

For the entire preseason, Boykin finished with two special teams tackles. That was tied for best on the team along with LB Buddy Johnson and S Donovan Stiner. Boykin offers some offensive value but what he does on special teams is really impressive and he’ll carve out a valuable role as the first line of defense when the Steelers send out the punt team.