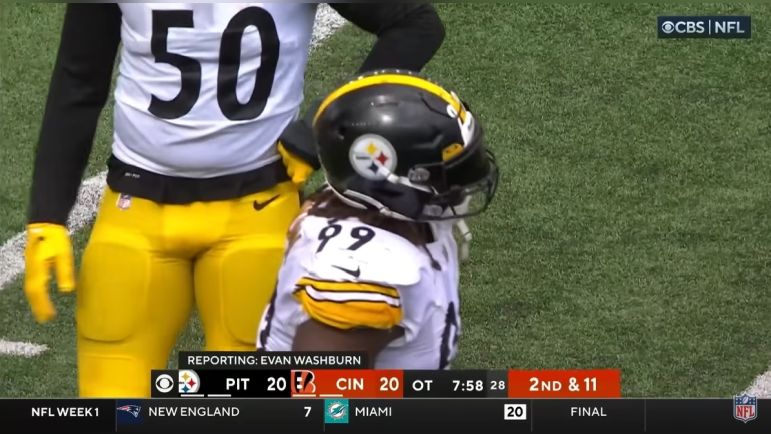 With a career-high seven sacks last season, Larry Ogunjobi’s signing was a clear boost to the Pittsburgh Steelers’ pass rush. But what about his run defense? The book on Ogunjobi was a good athlete, quality pass rusher, solid effort, but weak against the run. Look at his PFF grades and that’s the story they write and thus, the narrative that’s told.

Now I’m not going to pretend like I’ve gone back and watched every snap of his against the run at his previous stops, Cincinnati or Cleveland. Maybe he did struggle there. All I know is that in Pittsburgh, all summer, Ogunjobi hasn’t been a liability. He’s been an asset. And that continued in Sunday’s win over the Bengals, helping to hold Joe Mixon under four yards per carry.

Here’s three clips from the game of Ogunjobi making plays against the run.

First example. A “deuce” block from the Bengals, the right guard and right tackle doubling Ogunjobi before the guard comes off on the linebacker. Ogunjobi is a little tall but holds the line of scrimmage and gets vision on the ball. Good team run defense here forces Joe Mixon to bounce this run laterally and away from his blockers. A good fill by Minkah Fitzpatrick and close by Alex Highsmith help stop this for minimal yards.

Next example. Ogunjobi the 1T here between center and right guard. Chip from the center before he works to the next level. Ogunjobi has B gap responsibility here and carries out his assignment. But he gets his head across and closes up the A gap as Mixon gets downhill, a potential lane here with Devin Bush blocked by the center. Ogunjobi is in on the tackle to limit it for a short gain.

Those first two examples were man blocking. Last one is a zone scheme. Ogunjobi again the 1T aligned inside shade of right guard. On this zone run, the guard needs to try to reach and cutoff Ogunjobi, using a “bucket step” to open up his hips and work down the line. Ogunjobi is explosive off the line and doesn’t allow himself to get reached and works down the line to help make the tackle on Mixon for a run that goes nowhere. Really nice rep here.

Those are the best examples I can cite from Sunday’s game but his other run reps were solid. He anchored well against double-teams, maintained his gap, and kept vision on the football.

There were some minor things to work on, mostly pre-snap alignment that led to a couple assignment issues, most notably on a Joe Burrow scramble later in the game. But Ogunjobi’s debut was a good one, providing steady run defense and a bit of pass rush juice as he and Cam Heyward led all Steelers’ defensive linemen in snaps.