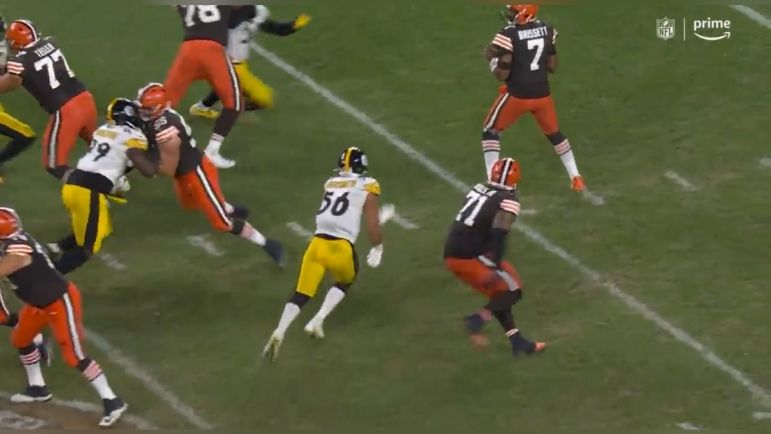 I don’t like to use the word “own” often. It’s a frivolous term and one that’s usually not accurate. But if there’s a time and matchup to describe it, it’s Alex Highsmith against Cleveland Browns’ left tackle Jedrick Wills. No disrespect to Wills, he’s a good left tackle. But Highsmith has had repeated success against him, none more than his inside spin that has dusted Wills again and again.

Let’s take a look at the rep. 3rd and 10, four minutes left. Steelers have to get a stop if they want even a chance to mount a comeback. Aligned as the ROLB, Highsmith bursts off the line and starts to attack Willis’ outside half as if he might rush the edge or perhaps use a power/bull move. Willis attempts to use a two-hand punch but as soon as he flashes his hands, Highsmith begins his inside spin. Because he times it so well, Wills is overextended and can’t recover. 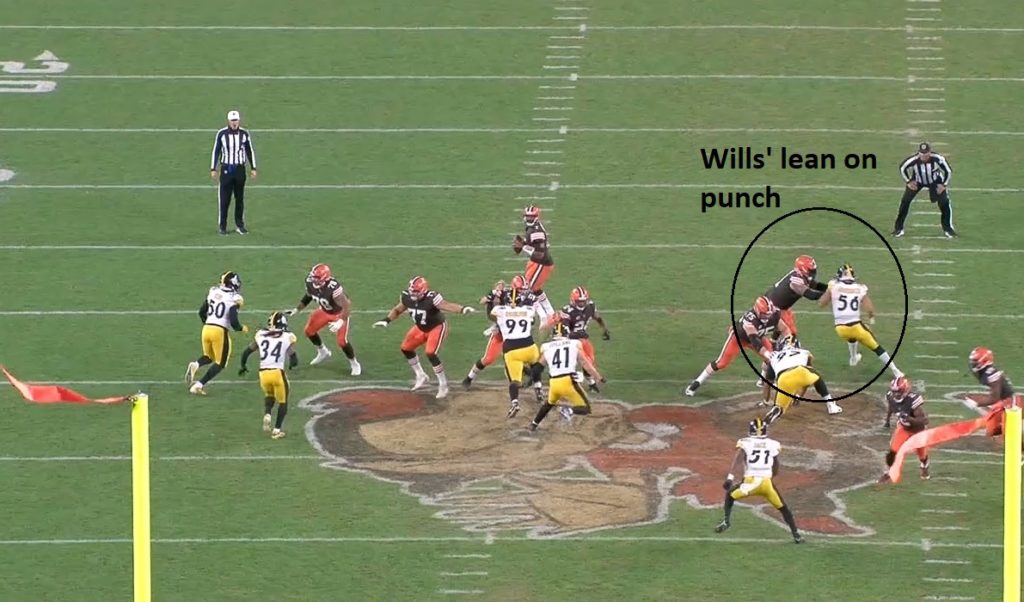 Highsmith’s spin is tight and quick and he quickly gets past Wills for a free path to the quarterback to sack Brissett, get the stop, and force the punt. Here’s a look at the entire rep.

This is a fantastic counter and also speaks to Highsmith’s intelligent pass rush plan. Up until this point, he hadn’t used the spin move the entire game, using bull and speed rushes every time before this moment. It’s worth noting the Steelers dropped him into coverage quite a bit, 35.5% of the time, so he had fewer rush opportunities overall. But he saved this rush for a crucial moment and it worked perfectly.

While it was the first time he used it in the game, it’s far from the first time he’s used it overall or against Wills. We’ve talked since Highsmith’s rookie year how effective the move has been. I’ve compiled clips of it dating back to the second matchup in 2020, Highsmith replacing the injured Bud Dupree, along with a sack he picked up on it last year (another third down rush, again, using it in big moments and not on a random 1st and 10 in the second quarter), before showing the one from Week 3. Take a look.

Pound-for-pound, it’s one of the most consistent winning rushes I’ve seen from a pass rusher against a specific blocker. Wills has not been able to adjust and counter and Highsmith’s move is generally effective, making it a go-to in those “gotta have it” type moments.

Through three games, Highsmith has 4.5 sacks, three in Week One and one in Week 3, responsible for exactly 50% of the Steelers’ sacks this season. He’s got a great shot at hitting his offseason goal of double-digit sacks and his athletic ability and pass rush IQ are working in his favor. Expect to see Highsmith try this move again in Week 18 when he faces Wills’ Browns again. We’ll see if Wills is ready for it.