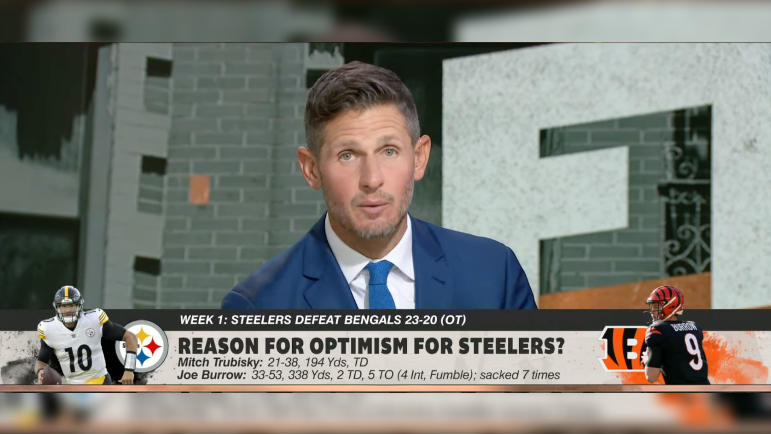 A win is a win, but it came at a cost for the Pittsburgh Steelers, who defeated the Cincinnati Bengals in Week 1 on the road in AFC North play in a wild overtime game, 23-20, but likely lost star outside linebacker T.J. Watt for the season, and now have guys like running back Najee Harris, cornerback Levi Wallace and center Mason Cole a bit hobbled moving forward with lower body injuries.

Still, the Steelers picked up an all-important win within the division and the conference, making sure that despite the high price to pay from a health standpoint, they did what they set out to do, which is win the game.

Moving forward, how do the Steelers look not only in the AFC, but in the AFC North overall? For former NFL quarterback and current ESPN analyst Dan Orlovsky, there’s no optimism for the Steelers moving forward without Watt, who was a game wrecker again on Sunday.

Appearing on ESPN’s First Take with former NFL wide receiver and Hall of Famer Michael Irvin and host Stephen A. Smith, Orlovsky put it bluntly in regards to his optimism.

“No, and it’s because of the T.J. Watt injury. That’s everything,” Orlovsky said Monday morning on ESPN’s First Take when asked if there’s a reason for optimism. “You watch that football game, he was absolutely lights-out dominant. It almost looked like he was in the Cincinnati Bengals huddle; he knew what was coming.

“…The reality is, they got five takeaways – one of which they scored on. I think they had five or six sacks in this game, and they still had to block an extra point to have the chance to go into overtime,” Orlovsky added. “Offensively, I could tell you what they’re going to do. They’re going to run a go route, a stop route, a slant route, or a slant return route. There’s very little rhythm to the offense, the offensive line is still poor, and without T.J. Watt that, you watch the change. Once that injury happened…that pass rush was very minimal. That’s a grave concern for Pittsburgh.”

It’s genuinely hard to disagree with anything that Orlovsky said on First Take this morning. Losing one of the best players in the NFL for potentially the season is a hard pill to swallow, especially when he’s the motor of the defense, the one that keeps everything running smoothly thanks to his dominance off the edge.

As far as the offense goes, the team was relatively stale with concepts and play-calling, which was a concern last season and remained one in Week 1 against the Bengals. There is very little rhyme or reason to play calls in certain situations, and there is no rhythm overall. When is the last time the Steelers’ offense felt like it was firing on all cylinders and rolling?

While Orlovsky didn’t have any optimism for the Steelers despite the Week 1 win, noted Steelers fan Stephen A. Smith still believes, at least for now.

“Even though [Mitch] Trubisky didn’t throw for 200 yards, the reality of the situation is that I like the fact that they have somebody capable of being mobile out of the pocket,” Smith said. “Freiermuth…is a reliable weapon. Diontae Johnson is no scrub. Chase Claypool is no scrub….I look at if from that perspective. I am more worried about Najee Harris’ injury…”

Stephen A. is optimistic the Steelers can stay in the mix with Mitch Trubisky at QB | First Take https://t.co/77DdTiIODq #Steelers

Outside of the injuries, Smith is also optimistic about the makeup of the AFC North, which the Steelers have a game in hand in already over the Bengals. Add in the fact that the Ravens remain a question mark and the Browns won’t have Deshaun Watson until after Thanksgiving, there is optimism for a Steelers team that still has stars in Minkah Fitzpatrick and Cameron Heyward defensively, and playmakers galore on offense.

We’ll see what the Watt news brings on Monday in an update from the Steelers, but there’s still a good football team there, even if that’s through some black and gold colored glasses from Smith.