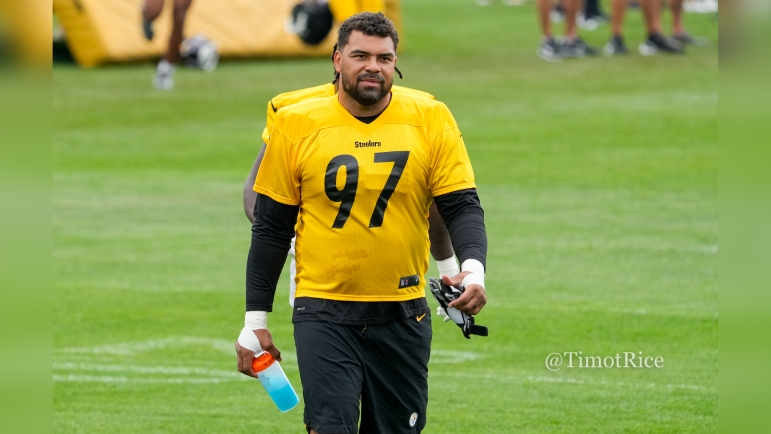 Entering his 12th year in the NFL, Pittsburgh Steelers star defensive lineman Cameron Heyward has quickly watched his role shift from young, up-and-coming star and team leader into the old guard, still viewed as an elite level player and leader for the black and gold.

Outside of fellow defensive lineman Tyson Alualu, Heyward is the oldest player on the Steelers’ roster, which underwent significant changes this offseason following the retirement of Ben Roethlisberger and Stephon Tuitt, and the retirement of Kevin Colbert in the front office. Now, on the cusp of his 12th season, Heyward – closer to the end of his career than the beginning, if we’re being fair — isn’t taking any moments for granted. Even the little ones in the locker room, especially as kind of the last of the old guard, or “The Last of the Mohicans” like one reporter alluded to.

Speaking with reporters Monday inside the locker room at the UPMC Rooney Sports Complex on the South Side after being named a captain for the eighth straight season, Heyward spoke about those little moments and how he’s not taking anything for granted and is enjoying being part of the new-look Steelers ahead of a 2022 season filled with some uncertainty, even as that veteran gray-beard in a relatively young locker room.

“It’s a joy to be here. You start thinking about your draft class and who’s left. I appreciate these moments,” Heyward said to reporters Monday, according to video via the Steelers’ official YouTube page. “I don’t take ’em for granted. I really do go in with a new perspective every year, just trying to get better. All those guys who have, you know, not only gone different places, but retired and had to do other things, I wear them on my sleeves.

“I appreciate them. I don’t have a 12-year career without every teammate I have had.  I represent those guys, even though they retired, and hopefully one day I can say we won a Super Bowl cuz of those guys too.”

Of the 32 first-round picks in the 2011 NFL Draft (Heyward was 31st overall), just 12 players remain active in the NFL to date, including fellow defensive linemen J.J. Watt, Robert Quinn and Cameron Jordan. Quite a group to still be active with. All four have a real chance at the Hall of Fame, too, with Watt being a stone-cold lock for the halls of Canton.

Looking around the league at his fellow draft class members that are still remaining, it’s starting to hit Heyward a bit (even if he won’t reveal it publicly) that he’s been around a long time and the end is near — but hopefully not too close.

Really, he’s essentially the last connection to the Super Bowl era Steelers, even though he never played in a Super Bowl, joining the Steelers one year after the loss to the Green Bay Packers in the big game. He was brought up under the likes of Aaron Smith, Brett Keisel, James Farrior, Troy Polamalu, James Harrison and more on the elite-level defense. With Ben Roethlisberger off into retirement, Heyward is that last connection, which is startling to see that sentence written on paper.

We’re all getting older, whether we like it or not. It does feel like the end of an incredible era, in a sense, which is why Heyward feels more appreciative, carrying those teammates from his past with him on his sleeve. driving him further and further towards success while chasing a Super Bowl.

It’s a joy to watch him on the field and off the field as a leader of the franchise and in the community. I have no doubt he’s spreading his wisdom to the younger generation of teammates underneath him, which hopefully leads into a new era of great success for the black and gold.