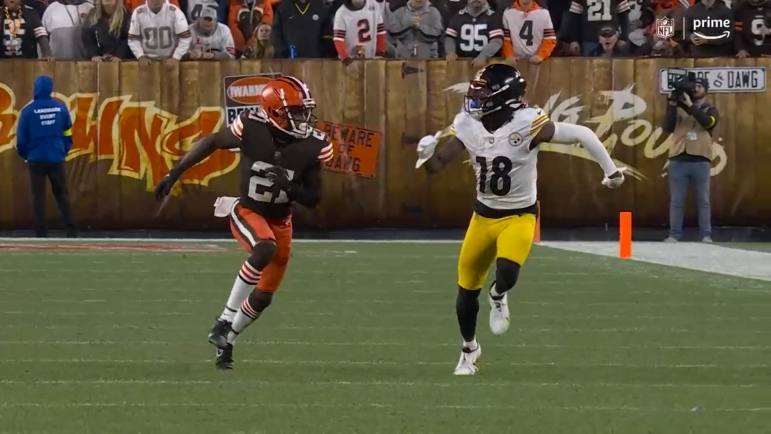 If it feels like WR Diontae Johnson is getting open a lot this year, you’d be right. ESPN’s analytical “open score” measures how often a receiver gets himself open, and through three games, Diontae Johnson is the third-most open receiver. ESPN’s Seth Walder crunched the numbers in a Wednesday morning article and ranked the top 10 open receivers in the league. These stats are a combination of 2021 and 2022.

Johnson is just one of three players in the 90s right behind the Eagles’ A.J. Brown and the Bills’ Stefon Diggs, who is known as one of the league’s top route runners. Johnson is certainly up there with the best of them and has become a more polished and nuanced route runner over his career, doing a great job of creating space at the top of his route. He’s most often been used along the sideline this season, a ton of out routes and comebacks, routes that require him to create separation at the top of his route.

While Johnson has been about as open as anyone in football, production hasn’t exactly followed. The volume’s been there, averaging 11 targets per game, but he’s averaging barely more than nine yards per catch and has yet to find the end zone. In fact, no Steelers’ wide receiver has caught a TD over their first three games, something that hasn’t happened in Pittsburgh since 2001 when it took until the team’s fourth game for a wideout to hit paydirt. Johnson also hasn’t been given many chances for YAC, a stark contrast to last season. In 2021, he had 527 yards of YAC, over 32 yards per game. This year, he has eight total yards of YAC, averaging less than three yards per game.

Johnson also leads the league this season with an 84 “Catch Score,” thanks to the sensational grabs he’s had against the Cincinnati Bengals and New England Patriots.

Walder’s post also provided a nugget of information on George Pickens. He was ranked as the second least-open receiver this season with an “open score” of just 28. He’s a raw route runner who wins in contested situations as opposed to separating, something that’s well-reflected in the data.

Again, you can comb through all the data by clicking the link here.