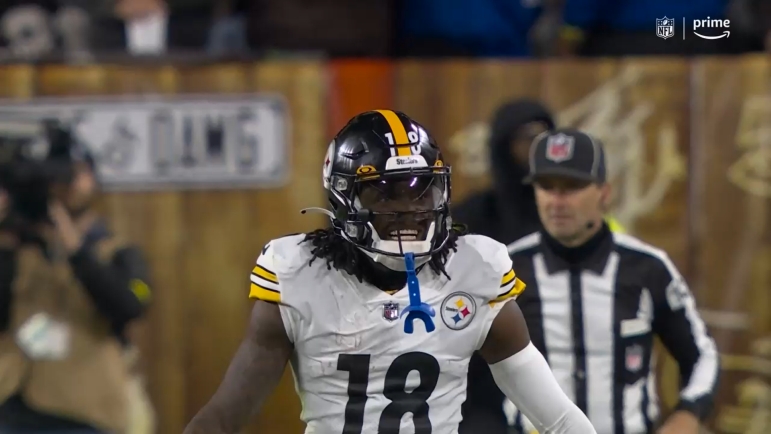 After a second straight loss and third straight week where the Pittsburgh Steelers offense has underperformed, frustration is setting in. After a lot of comments last week that seemed aimed at offensive coordinator Matt Canada from multiple offensive players, wide receiver Diontae Johnson talked tonight about being able to do what the coaches ask.

“We just make plays and hope the coaches call the right plays and put us in the right position. Obviously, we didn’t do that. We have to go back to the drawing board next week,” Johnson said per a tweet from 93.7 The Fan.

“It could be anything when it comes to them. When I say them, I mean the coaches. I’m not throwing them under the bus, but we can only do what they tell us to do and make plays. That’s about it,” he added, per 93.7 The Fan

Johnson had 8 catches for 84 yards but also had a drop downfield on what might have been Mitch Trubisky’s best throw of the night. The offense took more shots today, but the offense remained stagnant, generating just one third down conversion and only 14 points, with all of them coming in the first half.

With this being Matt Canada’s second year at the helm of the offense and that group once again looking below average, it would make sense that there’s some frustration among the team’s playmakers, including Johnson, with his scheme. However, Johnson has to be able to make plays when called upon, and he wasn’t able to always do that tonight.

There’s no denying that something has to change offensively. They have four touchdowns in three games and are averaging 14.7 points per game. That’s pretty awful, and if you couple that with things looking the same from last year and even week-to-week this year, it’s got to be frustrating to be a part of, nonetheless watch from afar.

The Steelers have never been and more than likely aren’t a team that’s going to make a drastic change though. Mike Tomlin didn’t seem to indicate there’s any plan for Kenny Pickett (or Mason Rudolph) to take over as the starting quarterback, and Matt Canada probably isn’t getting fired in-season, and especially not after only three games. As bad as things are, it’s going to be the same group of guys who have to fix them. Whether or not that can happen will determine whether Pittsburgh is competitive or not this season.

With a 10-day break before the Steelers return to Acrisure Stadium to take on the New York Jets, there’s time to try and improve this offense. If it doesn’t happen, the Steelers are going to have a long few weeks ahead of them with the Buffalo Bills, Tampa Bay Buccaneers, Miami Dolphins and Philadelphia Eagles following the Jets before Pittsburgh’s bye. If the offense can’t take a step (probably two steps) forward against the Jets, that might be a winless stretch. If that’s the case, the frustration is only to going grow.