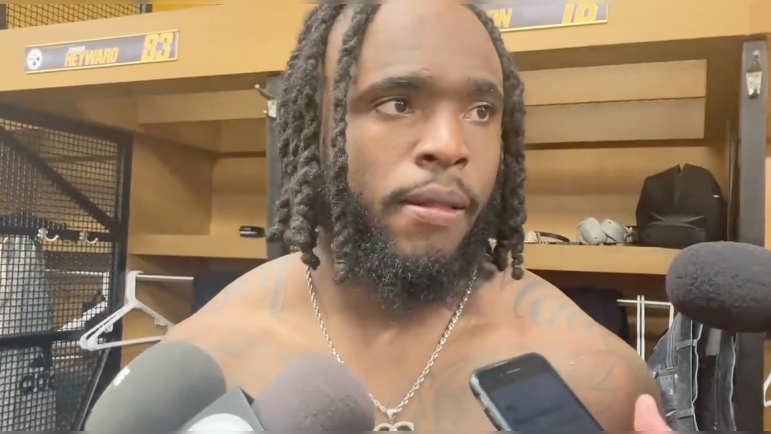 After a second straight three-and-out late in the game by the Pittsburgh Steelers’ offense, star wide receiver Diontae Johnson let his emotions get the best of him after believing he was open and could have moved the chains, showing his displeasure towards the Steelers’ sideline.

Following a third down throw to Najee Harris out of the backfield that the New England Patriots’ defense easily snuffed out, Johnson showed his displeasure, throwing his hands in the air while wide open on the route, drawing some attention for his short outburst.

Of course, the throw to Harris fell incomplete as the Steelers’ offense stalled once again, eventually resulting in a 17-14 loss to the Patriots. In the locker room, Johnson was asked about the short outburst from him, stating that while he was frustrated the ball didn’t come his way while trying to make a play to help the Steelers win, he has to do a better job of keeping his emotions in check.

“Just playing with emotion because I felt like I was open,” Johnson said to reporters from inside the locker room at Acrisure Stadium, according to video via the Pittsburgh Tribune-Review’s Chris Adamski. “Obviously the quarterback has a lot that he has to think about as well, so I can’t fault him on that. But we’re all out there just playing and trying to make plays. The ball just didn’t come my way so I showed a little emotion, but I gotta do a better job of that, and I put that on me.”

The Steelers offense closed the game with a pair of 3 and outs, and Diontae Johnson expressed frustration on the field after one of them pic.twitter.com/PRI3Mk8pEY

It’s understandable that Johnson was frustrated, as he was wide open on the crossing route in which Trubisky never looked his way. While Johnson did have a decent game, hauling in team-high six passes for 57 yards, there were some plays left on the field due to Trubisky’s struggles, as well as the lack of creativity offensively under second-year coordinator Matt Canada.

Still, when guys are that open, they should expect the football, especially when the offense is struggling the way that it did through the game on Sunday against New England.