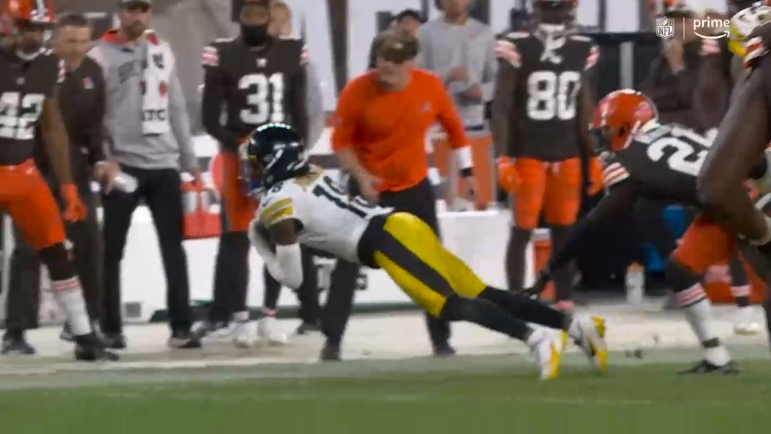 Certain segments of the media have spent the past week slicing and dicing and mixing and matching and extrapolating and inferring every which way the post-game comments from the Pittsburgh Steelers’ offensive starters, trying to put together a puzzle that spells chaos.

Players are asked specific questions and then they answer the questions and then it’s spun after the fact as ‘wow, look at what so-and-so brought up’, as though it’s something that they felt strongly about and needed to get off their chest. When you ask somebody to expound upon what they like about playing with tempo, they’re going to expound upon it. And players have been saying that they like playing with tempo—whether their team actually does it as much as they like or not—for decades.

It all makes you wonder how much there even is left to say, or what players will even want to say, when everything that they have to say is going to be spun into the missing piece for whatever preconceived notion somebody already holds—particularly if that somebody is a somebody with an audience.

Wide receiver Diontae Johnson was among those players who had his post-game comments rearranged to fit radio spots and articles with an angle toward promoting the idea that players are tired of Matt Canada’s offense and are bordering on a mutiny. He had to do some clarifying yesterday, and dropped a hint along the way.

“Like I said, it’s on us to make plays and the coaches to put us in the right spot to get us open”, he said, via the team’s website. “I feel like they’ve been doing that. We’ve just got to play and not talk as much. Just play and it’s all gonna come together”.

Johnson is not the type of player who even likes to talk much in the first place. He is not going to be strongly opinionated with a microphone in front of his face, at least not by design, no matter how his words end up being interpreted.

And so I think his saying that his saying ‘less talk, more action’ is entirely in keeping simply with his personality. He’s the kind of player, and the kind of person, who seems to be of the mindset that you let your work do the talking.

After all, plenty of players aren’t thrilled about getting in front of microphones and answering questions. For most of them, what do they care about having their voice heard in the media? What do they care about how well those outside the locker room understand what’s going on? It’s those who are inside that locker room that matter, and those inside already know what’s going on, so all that’s left is the action.

I’m hoping, writing this now in hindsight, that people aren’t going to spin Johnson’s words maliciously. I can see the headlines now from hacks. ‘Steelers Spectacular WR1 Diontae Johnson Takes Shot At Talkative Teammates, Tells Them To Keep Their Mouths Shut And Work Instead Of Complaining’.

It may get written that way—I sincerely hope not—but it’s not at all in keeping with the tone of his voice or really anything that we have learned about him over the past four years. Watch him give the answer at about the one-minute mark in the video linked above if you doubt my interpretation. I think if you watch it you’ll agree that it was an innocuous comment that should stay that way.