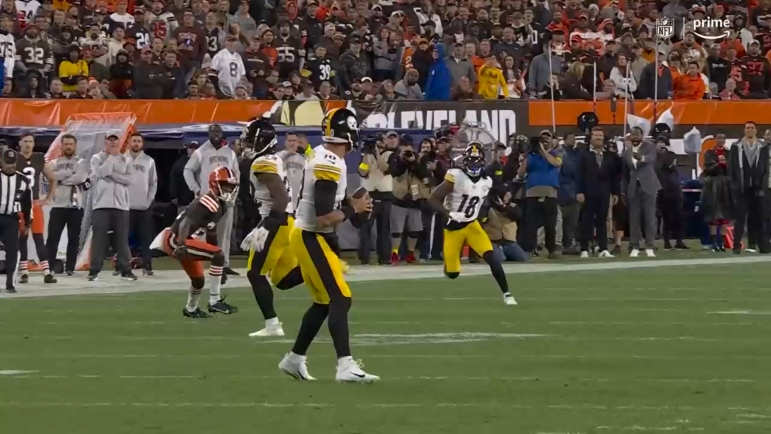 Pittsburgh Steelers rookie wide receiver George Pickens recently made headlines for saying something to the effect that he believes that he is open about 90 percent of the time when he runs a route. According to tracking data, that’s not true—of him. But it is roughly true for his Pro Bowl teammate, Diontae Johnson, whose calling card is his ability to gain separation and get open.

Johnson spoke to reporters yesterday in the locker room coming out of a two-game losing streak for the Steelers, and at one point during his media session, he was basically asked the Pickens question: does he think that he’s getting open?

“Yeah. Always”, he said, via the team’s website. “It’s just like, the ball ain’t gonna come to me every time. So even if the ball’s not coming to me I’m making sure I’m running my route 100 percent, just in case it does come to me, so I’m always ready”.

To a certain extent, I do believe that receivers should hold the belief that they are always ‘open’. That doesn’t mean that they’re not covered, but they should believe that they can catch and pass that is thrown in their direction—that the claim of ownership on that ball belongs to them no matter how many defenders are in the area.

And yet for Johnson, that’s not necessarily an issue, because he is actually exceptionally good within his routes at creating separation so that he actually is open. That’s why, when you think about it, you really don’t see him making all that many contested catches, do you? Because there’s nobody around to contest them. And that’s why he gets targeted so often. He’s the open man. Quarterbacks love the open man.

And the numbers show it. Going back to last season, Johnson has an ‘open’ score of 91, the third-highest in the NFL behind only A.J. Brown (which is surprising) and Stefon Diggs. He’s more open more often than Justin Jefferson, than Davante Adams, and everyone else you could name.

Johnson came into the league out of Toledo as a nuanced route runner, drawing comparisons to Antonio Brown in that regard, and he has only improved upon his skills at all phases of his routes over his four years in the NFL.

That’s why he’s seeing more and more targets every year. He averaged 9.6 targets per game in 2020, 10.6 in 2021, and now he’s up to 11 per game thus far in 2021. His receptions have unsurprisingly correspondingly ticked upward as well, eclipsing 100 on the season last year.