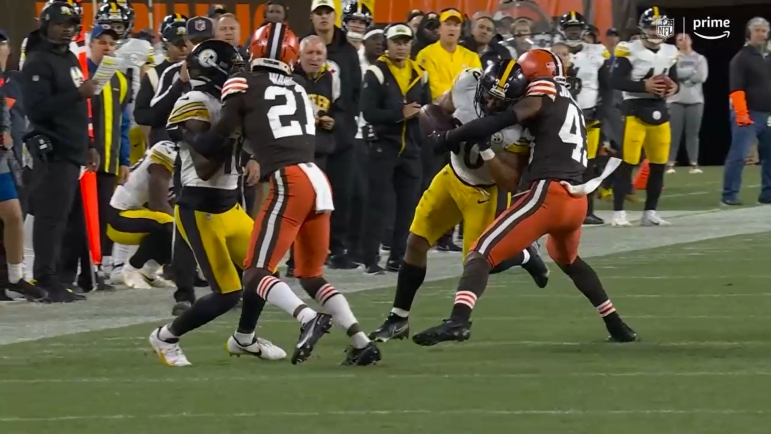 Three games into his NFL career, Pittsburgh Steelers rookie running back Jaylen Warren has 13 touches. And he has a fumble on one of those 13. Fortunately for him, teammate Diontae Johnson fell on the ball and recovered, but the college free agent knows that that’s a habit he needs to break immediately after doing so in training camp and the preseason as well.

The approach from the coaching staff is simple. “Just don’t do it”, he said of what he was told after putting the ball on the ground, via Joe Rutter of the Pittsburgh Tribune-Review. It’s one of those things where you don’t even need to be told. You just know. It’s self-evident.

“Our culture is ball security”, Warren said. “Obviously, you don’t want to put it on the ground. As soon as it happened, I looked at the sideline because I knew that’s where my next play was. I saw [head coach Mike] Tomlin (pointing his finger). I saw it coming”.

Warren played 12 snaps on Thursday night offensively, which was a season low after seeing 23 snaps in the opener and 17 a week ago. He had already played six or seven snaps by the time he fumbled in the middle of the second quarter at the end of a 10-yard run. He only played a few snaps after that, including just one touch that ended up not counting—the 35-yard screen pass.

But he wasn’t replaced, at least not by somebody new. Indeed, Benny Snell Jr. continues to remain on the bench when the offense is on the field. It merely increased Najee Harris’ workload with Warren seeing fewer snaps than he probably would have minus the fumble.

Really, ball security was about the only knock that there was on the rookie since training camp opened. After all, there is a reason that he not only made the 53-man roster but was unambiguously established as the number two on the depth chart. He does a lot of things well that the coaching staff likes.

But fumbles cannot be forgiven if they start to accumulate. Warren knows that. Coincidentally, Harris also had the first fumble of his regular season career on Thursday, and it was only by technicality as the last player to touch a backward lateral that was recovered by the defense for a touchdown during an end-game situation.

Needless to say, Harris isn’t going to be losing any snaps over that, and he probably didn’t even hear anything from his coaches about the play. Warren, of course, was immediately pulled to the sideline and had his ears occupied for the next while, first by coaches, and then by Cameron Heyward.

Yet I see no reason why fumbling would be a chronic issue that we should be concerned about as far as Warren goes. There’s nothing about him that makes him predisposed to an elevated number of fumbles. Here’s hoping it’s past him and this is the last fumble we’ll be talking about for a while.