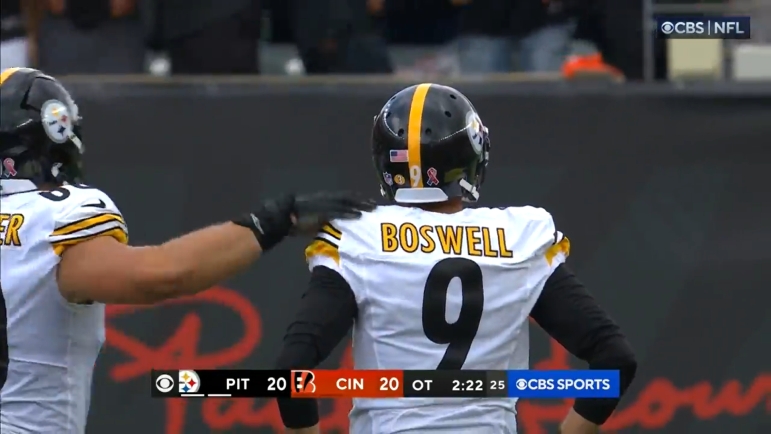 Anybody who watched the Pittsburgh Steelers’ season opener live as it was unfolding will surely recall what a rollercoaster experience it was, with the tide of momentum turning back and forth between the visitors and the host Cincinnati Bengals. That became especially true in the fourth quarter and into overtime, at which point special teams field goal units took center stage.

While the Steelers’ Chris Boswell had already made two field goals in regulation, he kicked his third make out of four attempts with time expiring at the end of the 10-minute overtime period. But it took a blocked extra point and a shank across the laces from Bengals second-year kicker Evan McPherson to get us to that point—and past his own miss, a doink off the left upright from 55 yards out, which sticks in his mind more than the game-winning field goal.

“I think my text said something like, ‘Don’t give my guy two chances because he’s not missing’”, former Steelers quarterback Ben Roethlisberger said on his podcast yesterday about his long-time former teammate, Boswell. “He just said thanks, but I thought he said something that was really interesting, that really speaks for who he is”, he went on. “He goes, ‘I think I’m at home right now feeling more mad that I missed the first one than happy I am I made the second one’. Which, he won the game. But he was still tore up about missing the first one”.

The thing is, Boswell isn’t accustomed to missing often. He has among the very highest field goal percentages in NFL history, and is only not recognized for his greatness more acutely for the misfortune of playing at the same time as Justin Tucker. But he has been nearly as automatic as the Baltimore Ravens’ placekicker.

“I never expect him to ever miss. When I played with him, whenever he came on that field, I was counting it”, Roethlisberger said, going on to talk about how Boswell was not easily phased, nor was he finnicky about his process or where he was kicking from.

“It didn’t matter how far it was, what it was. There were times at the end of games where I would be like, ‘Hey Boz, what hash do you want it on?’”, he said. “A lot of kickers are like, ‘I’m a left hash, I’m a right hash, I want this distance’, I want whatever it is. And he would always way, ‘I don’t care. Put it anywhere. I’ll take it any distance’”.

It has only been with Boswell that the Steelers and head coach Mike Tomlin have been more adventurous with distance, having had to prove over time that they could expand their field goal range. As great as Shaun Suisham was, kicking over 50 was a crapshoot. Boswell has made it from 59. That he doinked a potential game-winner off the upright from 55 yards out and that it was met with complete surprise is simply a testament to how routine greatness has become expected from him.