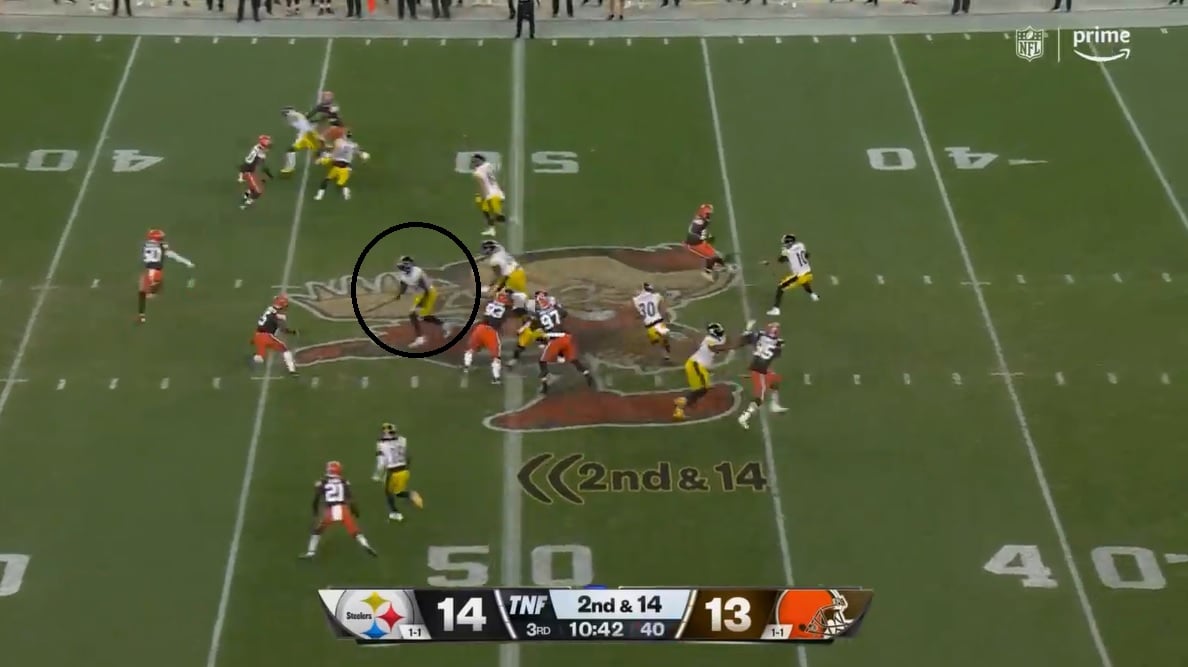 Aside from rookie wide receiver George Pickens’ spectacular one-handed catch—which he doesn’t even put in his own personal top-five highlight reel—there was perhaps no play more talked about in the wake of last Thursday’s game between the Pittsburgh Steelers and the Cleveland Browns than the 35-yard shovel pass that wasn’t.

At the 10:45-minute mark in the third quarter, facing 2nd and 14, the Steelers ran an inside screen to rookie running back Jaylen Warren, which he was able to pop off for 35 yards. It was called back because right tackle Chukwuma Okorafor was flagged for being ineligibly downfield, even if that is not the aspect of his execution on that play that had everybody talking.

Offensive coordinator Matt Canada was asked yesterday if he would tweak the way that they ran that play to try to prevent linemen from being flagged for being too far downfield. He paused and tried to come up with a neutral response, but you can be the judge as to whether or not he succeeded.

“We’re not going to change anything about that play”, he said after reflection, via transcript. “The way that that play was executed, we executed exactly as we want it executed. When we call that play, we hope to execute it exactly like that again”.

Well, you can’t get any more direct than that. And of course Canada is not referring to the element of the play that resulted in Browns linebacker Anthony Walker Jr. suffering a season-ending injury. He’s talking about the setup and how it was run. After all, it did pick up 35 yards. Or would have, if it wasn’t flagged. Assuming it was officiated correctly.

“It is what it is”, Canada said when asked if he believed the play was properly officiated. “Obviously, we understand the rules, and sometimes things happen and we’re sitting there talking about all the things we’re not doing. So, I’m not up here doing that. Just, to your question, that play, we’re not going to change anything about it. I respect your question, but I’m not going to answer it”.

Earlier in the week, head coach Mike Tomlin was also asked about the ineligible man downfield penalty and whether or not he agreed that his man was downfield ineligibly. At least, when asked somewhat incredulously if a lineman could even be downfield ineligibly on a shovel pass, he responded in somewhat exasperated fashion, “Evidently, yes”.

Any player who is not eligible to catch a pass on a play must not be more than one yard beyond the line of scrimmage at the time that a pass is thrown, according to the rulebook (which you can view in the previous link). There is also a list of exceptions.

To my mind, it’s really a bang-bang play, and it depends on how strictly you interpret the one-yard rule. I think it was ultimately a fair ruling, if a very strict and literal one. At worst, if was an extremely minor infraction that one would not at all be surprised to go uncalled, so close was it to being onside.

But I’m not sure if I were an offensive coordinator I would be saying that I’d run the play the exact same way over again. Even if you believe your guy was actually legally onside, you can’t guarantee that they wouldn’t rule the same way again.