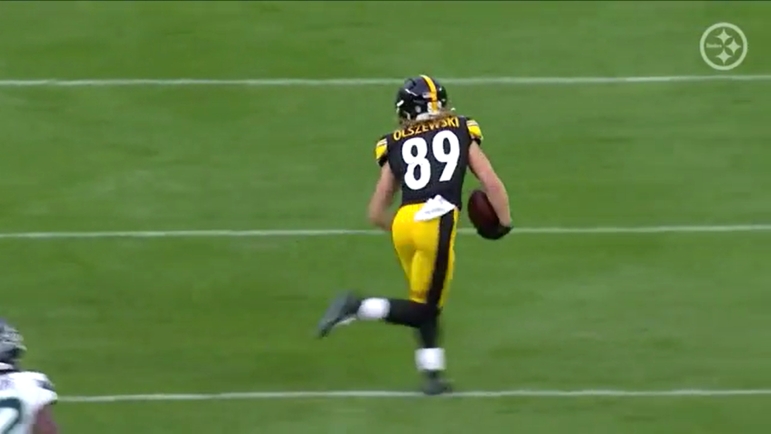 When the Pittsburgh Steelers signed veteran wide receiver and punt returner Gunner Olszewski to a two-year deal in free agency, the expectation was they were addressing the major hole left behind on the roster on special teams due to the departure of Ray-Ray McCloud to the San Francisco 49ers in free agency.

Turns out, they got more than they were hoping for with Olszewski, especially on offense, as the veteran receiver — who was an All-Pro return specialist with the New England Patriots — has shown he brings some juice to the table offensively from the slot as well, giving the Steelers’ deep receiver room another added piece to work with thoughout the 2022 season.

Speaking with reporters Thursday from the UPMC Rooney Sports Complex on the South Side, second-year offensive coordinator Matt Canada praised Olszewski, stating that the Steelers have been very happy with what the receiver has brought to the table in an offensive role, on top of his special teams prowess.

“He’s come in and, obviously he had a special teams role as that’s certainly a major part of what he does, but he’s added some things to us on offense,” Canada said to reporters, according to video via the Pittsburgh Tribune-Review’s Chris Adamski. “We’ve been very happy what he’s bought to the table and kind of shown us throughout the spring and through camp.”

Steelers offensive coordinator Matt Canada on what Gunner Olszewski’s addition means for the offense as a WR pic.twitter.com/G9aaK7VZjT

Olszewski was a bit of a surprise in training camp, working exclusively out of the slot with the first and second team offenses due to injuries ahead of him. To his credit, he seized upon the opportunity in training camp and ran with it, earning a role in preseason action, even scoring a touchdown on the first offensive drive of the preseason on a 13-yard pass from Mitch Trubisky.

Though it’s unlikely he sees such a large role in the regular season once everyone is healthy at the receiver position behind the likes of Diontae Johnson, Chase Claypool and George Pickens, it is worth mentioning that Canada sees some sort of role for the diminutive Olszewski outside of his special teams responsibilities.

What that is remains to be seen, but he’ll get some work offensively and will have a chance to impact the game much more than he did in New England.