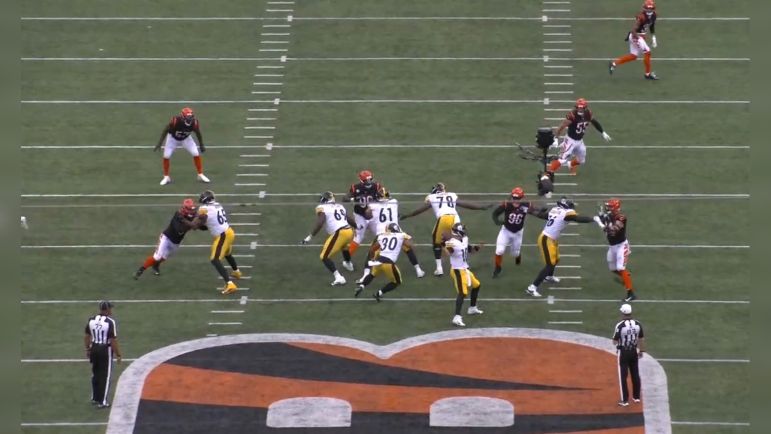 It’s no secret the Pittsburgh Steelers’ offense is a work in progress. Lately, it’s felt more like PennDOT. Always working, never fixed. And when it came to third down, the Cincinnati Bengals’ defense was the guy holding the big “stop” sign on the side of the road. Going just 4/15 on third down, OC Matt Canada knows Pittsburgh must be better situationally. And while a poor run game didn’t help matters, the Steelers still found themselves in manageable situations.

Canada spoke with reporters Thursday and touched on the third down offense, evidently after being asked about the team not using the middle of the field more often.

“We gotta be better on third down,” he said as tweeted out by The Trib’s Chris Adamski. “We were 4 out of 15 on third down. Out of those 15 third downs, nine of them were 3rd and 5 or less. That’s what you want. We have to execute better there.”

Steelers OC Matt Canada takes a question about why the offense didn’t use the middle of the field in the season opener as an opportunity to say the offense stunk on 3rd downs pic.twitter.com/7Y1dqnkpC1

Pittsburgh averaged just 5.8 yards to go on third down against the Bengals, a surprisingly good stat considering how many problems the run game had, Steelers’ backs averaging just 2.8 yards per carry. But a lack of a steady run game isn’t an excuse and the Steelers stayed clean sack- and penalty-wise, avoiding third and forever most of the time. Canada detailed some of the exact problems in those third-and-manageable moments.

In the first quarter, Diontae Johnson came up inches shy of the marker on a pivot route against zone coverage, drifting back on the catch and unable to make up the ground. Mitch Trubisky fired a deep shot down the left sideline to Miles Boykin, who looked back too early for the ball, slowing him down and seeing the ball fall a step in front of him. Late in the first quarter, Trubisky felt pressure and threw off-target to a well-covered Pat Freiermuth in the low red zone.

It appears the two communication issues came later in the game. A potential missed speed out by TE Pat Freiermuth or the wrong route by WR George Pickens. The latter seems a bit more likely. Pittsburgh’s final offensive snap tried to get them closer for kicker Chris Boswell, but an O-line breakdown on RG James Daniels let the DT past, forcing Trubisky to basically throw the ball away.

It’s one of the many things the Steelers’ offense must clean up this weekend. They’ll be facing an opponent dealing with similar problems in the New England Patriots. Like Pittsburgh, the Pats’ offense found the end zone just once in Week 1, potentially leading to a low-scoring affair at Acrisure Stadium this Sunday.