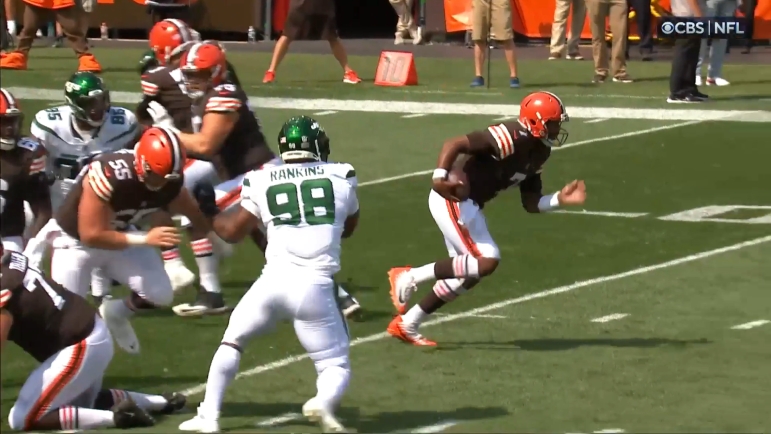 The Pittsburgh Steelers will be facing one of their biggest challenges on the ground tomorrow when they take on the Cleveland Browns, who boast not only arguably the best one-two running back combo in the league, but also a quarterback who is more than capable of pulling the ball down and taking off when necessary.

While defensive coordinator Teryl Austin is dutifully concerned with game-planning to stop Nick Chubb and Kareem Hunt, this group also understands that discipline will be required to account for the threat of quarterback Jacoby Brissett picking up yardage on the ground.

“He uses his legs when he has to”, defensive lineman Cameron Heyward told reporters yesterday via the team’s website. “It’s not just him going out there running acting like he has to do too much. It’s a thing where it’s a last line thing. He’s checking downfield, he’s making sure he can get the ball to his guys”.

The veteran has already taken off 10 times this season for 53 yards, picking up four first downs with his legs over the course of the team’s first two games. Those numbers include one kneeldown for a one-yard loss as well as two quarterback dives on 3rd- or 4th-and-1 scenarios, both of which he converted. He has 50 yards on seven scrambles, including runs of 21 and 13 yards on Sunday against the New York Jets.

“He’s a strong runner in and of itself, so if he does have to run, you’ve got to put full body weight on a guy like that”, Heyward said of playing Brissett, “because he’s able to adjust similar to how young Ben [Roethlisberger] was, where if you don’t tackle him, he’s gonna shrug you off”.

Brissett has never been a run-first quarterback, but has always been willing and able to take off when necessary. During his most recent season starting in Indianapolis, he recorded 56 rushing attempts for 228 yards, registering 20 first downs and four touchdowns. He has 706 career rushing yards with 13 rushing touchdowns.

And he plays in an offense in Cleveland where they will more freely allow him to use his legs and scramble than perhaps he had in the past—which is why he has already scrambled seven times in two games, which puts him on pace for nearly 60 rushes just on scrambles alone this year.

And it’s not as though the Steelers don’t have reason to be concerned. In Week 1, they allowed Cincinnati Bengals quarterback Joe Burrow to record 47 rushing yards on six attempts, most of which were scrambles. Brissett is certainly a bigger running threat, though Burrow is no slouch, and is probably more likely to take off if he’s pressured—if being the key word without T.J. Watt.