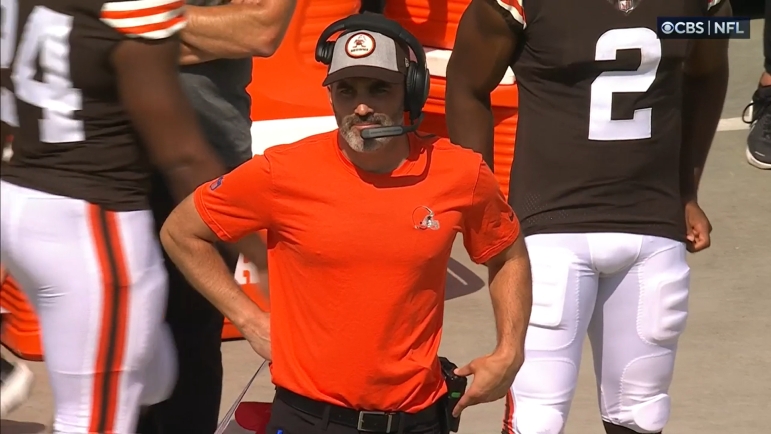 Every single team in the AFC North is currently coming off of a tough loss, but the rest perhaps not as brutal as that suffered by the Cleveland Browns—although the Baltimore Ravens certainly have an argument to make.

Still, only the Browns and the Pittsburgh Steelers have an early opportunity to get the bitter taste out of their mouths, as Cleveland will be hosting ‘our’ team on Thursday Night Football on, you guessed it, this Thursday night. And Browns coach Kevin Stefanski can’t wait.

“Yes, I do think it is good that we have a game Thursday”, he told reporters yesterday, via the team’s website. “I think back to 2020, a very tough loss in that first game and then right back at it at home versus a divisional opponent. I do think it is beneficial to just get out on the field today, get out on the field tomorrow and then obviously get under the lights Thursday night. Like we mentioned earlier, anything that we need to fix, we have to fix. We do not have any time to wait”.

Stefanski is actually referring to the first game of his career as head coach, when his Browns were blown out in week one of the 2020 season by the Baltimore Ravens, 38-6. They came back the following Thursday, however, to beat the Cincinnati Bengals, 35-30 for a home Thursday night game. Indeed, it sparked a four-game winning streak, which at the time was their longest winning streak since the end of the 2009 season. And still is, by the way, though they had another four-game streak that same season.

It was the best season since the organization was resurrected in 1999, and marked their first playoff victory since 1994. The 2021 season did not go as well as planned, but they are hoping to right the ship this year after committing to a new quarterback who is serving an 11-game suspension.

Jacoby Brissett was brought on board to be the backup and to start in his absence, and for the most part, he has done ‘enough’, although this remains an offense that is driven by the success of the running back with Nick Chubb and Kareem Hunt.

As for the Steelers, they are obviously looking to get the bitter taste of the loss to the New England Patriots out of their mouths, but in their case, I’m not so sure the quick turnaround is to their benefit, at least schematically, because I think they have a lot more things to work on than the Browns do.

One area in which they have an advantage is the health front, as it seems that Pittsburgh is likely to have a clean bill of health among the available players, while the Browns have already ruled out Jadeveon Clowney and Chase Winovich, and Myles Garrett could be questionable to play as well. Brissett is expected to play, but he was banged up late in the game, and could probably use the extra rest.