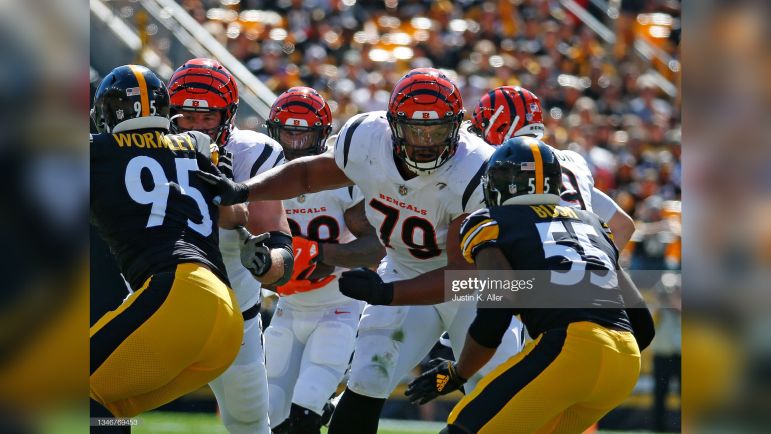 Entering the offseason in 2022, the Cincinnati Bengals understood that their top priority had to be fixing the offensive line—something that they appear to have done a better job of than the Pittsburgh Steelers, albeit not as significantly as many Steelers fans might think. They signed three new starters in free agency, but were counting on Jackson Carman, a 2021 second-round pick, to emerge as a starter.

Well, he hasn’t. Cordell Volson is going to be the Bengals’ starting left guard when they host the Steelers next Sunday, and Carman, presumably, is going to be a backup, even if beat writers as notable as Paul Dehner Jr. heavily speculated that he might actually get cut, and perhaps still could.

Volson is a rookie fourth-round draft pick out of North Dakota State, where he blocked for former Steelers quarterback—very briefly Steelers quarterback, that is—Chris Oladokun last year. Though he profiles better as a tackle, guard is where there was an opening.

“I like Jackson. I think he has a very bright future. But right now, he’s a backup guard”, Bengals head coach Zac Taylor said of Carman after making the announcement that Volson would be the starter between Jonah Williams and Ted Karras along their new-look offensive line.

“He has come a long way since last year. We just added another player to the mix who has also shown improvement”, he said, in his remarks building up to the declaration that he is a backup. “This isn’t even a setback. It’s an opportunity to learn and grow”.

That is, of course, a tough sell given that it was assumed all offseason that he would emerge as a starter in his second season. He was beaten who by a rookie of lesser pedigree who is arguably better equipped to play at tackle.

It’s clear that he hasn’t made the kind of progress that the Bengals were expecting this year, though that doesn’t mean that he ought to be written off. Still, one wonders if there were a regime change that he wouldn’t have gotten released, as the Las Vegas Raiders did with 2021 first-round tackle Alex Leatherwood.

Carman is blessed right now to have consistency around him and a coaching staff that can afford to give him time to develop. Of course, we can draw immediate comparisons to the Steelers and 2021 third-round pick Kendrick Green, who in another situation very easily could have been cut himself, though in his case, it was never assumed as a given that he would win a starting job, as he would have to compete with Kevin Dotson, an incumbent.

For now, though, Pittsburgh doesn’t have to worry about Carman. In fact, they would rather be playing him. Instead, Cameron Heyward will be lining up against a rookie, which is not a bad deal, either, to be fair. Here’s to hoping the All-Pro makes him look like Carman.