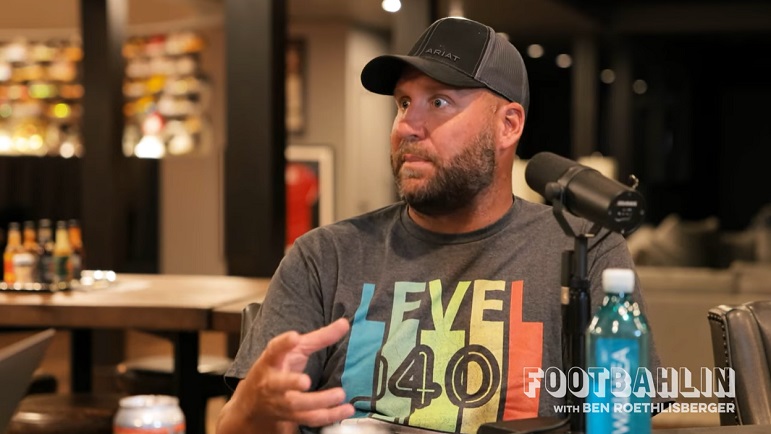 Former Pittsburgh Steelers quarterback Ben Roethlisberger now has a new podcast so we can now look forward to listening to it every week. The inaugural episode of his new podcast dropped on Sunday and as expected, the recently retired quarterback delivered several tasty soundbites that are sure to fuel conversations in the media this coming week. During one particular portion of the first episode, Roethlisberger was asked about his great 2004 rookie season and if it will now lead to added pressure being put on Steelers’ rookie quarterback Kenny Pickett to match or exceed it.

Specifically, Roethlisberger was asked if he thinks his own rookie season is going to fuel the competitive spirit in Pickett, or if he thinks that’s something that could potentially be detrimental to the rookie first round draft pick out of Pittsburgh.

“No, I think it’d be good,” Roethlisberger said. “It reminds me a lot of in a way of when I came in. Right? Like you said, the Steelers have an unbelievable defense. I mean, from guys up front, Tyson [Alualu] and Cam [Heyward] to the edge rushers in Alex [Highsmith] and T.J. [Watt], the linebackers. I mean, they’ve got Minkah [Fitzpatrick] in the secondary, one of the best safeties in the game. I mean, the defense is really, really good. Same thing when I came in.”

Roethlisberger, however, then went on to state the differences to his situation in 2004 to that of Pickett’s in 2022.

“When I came in, the defense was really good,” Roethlisberger said. “The only difference is we had a lot of veteran guys on offense. Veteran [offensive] line. Jerome Bettis. Veteran receivers. I was really the one young piece that was in there. That’s a little different now because it is such a young offense, like very young offense. And so, it’s going to be tricky, I think. But it benefits the quarterback to have a really good defense because you don’t have to try and do too much.”

Roethlisberger certainly is right in that regard as the Steelers’ offense that’s set to open Week 1 is in no way as experienced as the one he took command of in 2004 and especially when it comes to the offensive line. Heck, fourth-year wide receiver Diontae Johnson is essentially the most experienced player on offense, outside of quarterback Mitch Trubisky, who Roethlisberger said during his podcast should be the team’s Week 1 starter, in his opinion.

“But he is gonna have to, we’re talking Mitch right now, he’s gonna have to play well,” Roethlisberger said of Trubisky. “And hopefully it’s not Kenny, because if Kenny’s coming in, then that means Mitch is struggling and doing something wrong. And I love Mitch and hope he doesn’t. When I came in, I was the kind of the three and maybe fourth guy. We had Tommy Maddox, Charlie Batch, Brian St. Pierre and myself, all guys that were here before I got here. And you know, Brian and I were kind of battling for that three spot. Charlie got hurt early in camp so all of a sudden now I’m like the kind of two.”

In case you forgot, the initial plan for Roethlisberger in 2004 was for him to open the regular season as the third quarterback on the depth chart behind Tommy Maddox and Charlie Batch. Batch, however, had a knee injury during training camp that year that shelved him and that resulted in Roethlisberger bumping up the depth chart in the preseason.

“Charlie got hurt in camp and so it was kind of like, okay, now all of a sudden you kind of get elevated up, Roethlisberger said during his podcast. “And Charlie’s a veteran guy. I mean, I guess he was not a veteran at the time, but he had been around the league, played in Detroit for a while. High draft pick. Played really well. So, he is a guy that they trusted and stuff, and then he gets hurt and it’s like all of a sudden it’s just me back there.”

As most of you should recall, Maddox opened that 2004 season as the Steelers’ starting quarterback and he went down with an elbow injury early in the team’s Week 2 game against the Baltimore Ravens. That injury effectively jumpstarted the career of Roethlisberger.

“And you don’t expect the starter ever get hurt, but then all of a sudden Tommy gets hurt in the second game and it’s like, ‘holy cow,’ like all of a sudden I have to go in. And so, I hope that doesn’t happen to Kenny because I don’t want Mitch to get hurt or anything like that. But, yeah, for me it was very unique and almost scary because it was like, don’t screw this up. You’ve got a great defense; you’ve got a veteran group of guys on offense. Like, I’m the young guy and I was running around like a chicken with my head cut off sometimes, just like extending plays, trying to make things happen. I put so much pressure on myself though because I didn’t want to let the guys down.”

Roethlisberger did anything but let his teammates down that season as after his rocky debut after taking over for Maddox midgame, he went on to lead the team to fourteen consecutive wins as well as a Divisional Round playoff win against the New York Jets. Roethlisberger’s first loss as the Steelers’ starting quarterback didn’t come until the AFC Championship Game against the New England Patriots.

Late in his podcast interview, Roethlisberger reiterated once again how he felt his job as a rookie mostly entailed just not screwing things up because of how great the defense was at the time and how the offense also was comprised of quite a few talented veteran players as well.

“Yeah, but at the time, it wasn’t about, okay, I have to be great. It was like, ‘don’t screw up,'” Roethlisberger said. “There was a difference. It wasn’t like I got to go out and be the man. It was like, don’t screw up because there’s guys that are counting on you. And most people are going know that when I came in, Alan Faneca, who’s a Hall of Famer, he was an offensive lineman, a guard. They asked him at one point, ‘are you excited about the rookie playing?’ He’s like, ‘no, why would I be?’ They came to me like, ‘what do you think?’ I’m like, ‘well, I don’t blame him.’ And he was really close with Tommy, so you don’t blame him for that.

“But you know, it was like, okay, just don’t mess it up for guys like that. Like, just find a way. You don’t have to be special. Just don’t be awful. There were games and things I did that I think were pretty good, but it wasn’t like I was out there throwing for 500 yards a game and doing something crazy. I was doing some pretty cool things and playing well, but it was more about just playing within what we have and not screwing it up.”

In summation, Roethlisberger going about comparing and contrasting his situation in 2004 to Pickett’s in 2022 is right on the money. Even so, and while the Steelers’ defense is expected to be very good in 2022, I think most of you will agree that the expectations surrounding the 2004 defense were much greater than they are now. Additionally, and as Roethlisberger smartly pointed out, the offense that he took over in Week 2 of his rookie season was a much more polished and experienced unit than the one that Pickett might be injected into at some point in 2022. Basically, it isn’t likely to be a situation where Pickett is asked to not screw it up, but instead, to make it much better.

The Steelers have yet to announce their starting quarterback for Week 1 but even so, odds seem to heavily tilt toward Mitch Trubisky getting the nod. Based on what Roethlisberger said during the inaugural episode of his new podcast, such an outcome would likely be the best thing for Pickett right out of the chute and with that being no slight against the team’s first round draft pick.