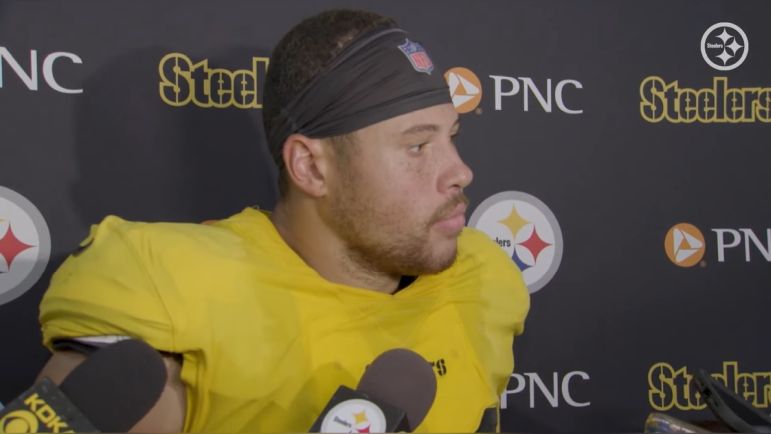 It’s been awhile since fans have seen Alex Highsmith’s #56 out on the field. For the last month, he’s been stuck on the sidelines, rehabbing and recovering from a rib injury suffered during training camp. But he’s turning the corner at the right time, and speaking to reporters Wednesday, declared himself healthy for the season opener this Sunday against Cincinnati.

“I just tell [Mike Tomlin] I feel great,” he said via Steelers.com after today’s practice. “First couple of padded practices this week, first time back in awhile. I feel in-shape. Doing contact this week, I feel great.”

Injured on August 8th, Highsmith missed the back half of training camp practices and all three preseason games due to the rib ailment. But he was back on the practice field this week and not listed on the Steelers’ first injury report of the week, signaling he’ll be good to go this weekend. Conditioning may be a concern, though, after missing so much time, and newly acquired Malik Reed could see an increased role because of it.

While Highsmith didn’t explain exactly what happened, he broke down the nature of his injury and how it was worse than he initially thought.

“It was just an accidental play…it was something I thought at first I got the wind knocked out of me. I tried to go back in. Felt something was up, something click, so I had to take it easy. But I’m feeling good.”

While he couldn’t practice, he didn’t use the time to sit idly by. To the level that he could, he was an active participant in practice and stuck to T.J. Watt, watching him go through pass rush moves on the side during special teams sessions. Highsmith said he used his time injured to work on his game above the neck.

“I think it’s big for me over the last month and really just develop my IQ of the game because not being able to go in there and practice.”

Now, he’s back on the field aligned opposite of Watt. Their mission this weekend is to get after Joe Burrow. Pittsburgh only sacked him twice in two meetings last year. That won’t get the job done if the Steelers are going to upset the Bengals to kick off the season. In last year’s opener, they took down Bills’ QB Josh Allen three times, including a strip-sack/turnover, and they’ll need that again to start 2022 off 1-0.