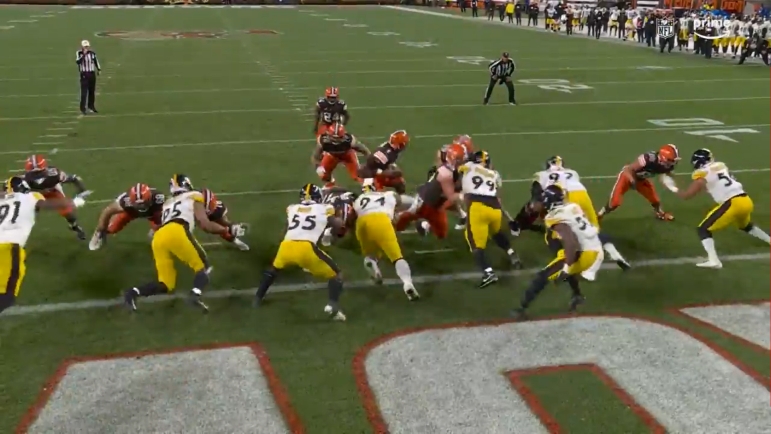 Reasoning: The Steelers officially named Montravius Adams the starting nose tackle moving forward, passing Tyson Alualu on the depth chart after, as head coach Mike Tomlin said yesterday during his pre-game press conference, that he has been playing better than Alualu.

As unfortunate as it is to say, I woke up to the news of Tyson Alualu being demoted and I was not surprised. Truth be told, I had just been watching him that morning before going to bed. I was actually watching Browns guard Wyatt Teller after reading his comments about Chukwuma Okorafor’s block and wanted to see how he played.

And I saw him dominating Alualu. I saw him decleating him at the goal line. It was a frustrating realization, but when head coach Mike Tomlin said that Montravius Adams was playing better than Alualu, he meant it. And it said as much or more about Alualu than it did Adams.

Maybe he’s still recovering from injury, as he dealt with a knee issue throughout the offseason, and of course is coming off a year of basically not playing. Maybe he’s still finding his football legs again, and at some point later in the year, he’ll be back to where he was in 2020.

But even if he does show some improvement in a more reduced role going forward—it’s probably more realistic to ask him to play a dozen snaps rather than three dozen—it’s pretty obvious that we’re close to the end of his career. This is almost undoubtedly his final season. Or if it’s not, it won’t be in Pittsburgh.

There’s no shame in that, of course. He’s had a long and successful career, and even reinvented himself to some degree after arriving in Pittsburgh and getting a second wind. His play at nose tackle his first season as a full-time starter there was somewhat surprising, but also refreshing, even though he had always been a stout run defender.

The fact of the matter is that the guy who is out there right now is not the guy we had seen since 2017. And I don’t know that we ever see that guy again.