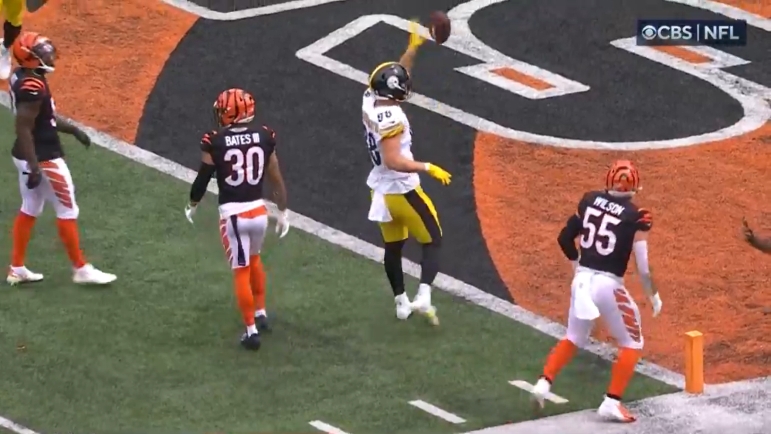 New Steelers quarterback Mitch Trubisky attempted 38 passes during his first game with the team. Admittedly, the game ended up going 70 minutes because of overtime, so that inflates the number, but we can also (hopefully) reasonably expect that the offense will be able to have more sustained drives that allows for more time of possession.

After all, even though the game went 10 minutes longer, the Steelers only possessed the ball for 26:18 compared to the Bengals’ 43:42, and you can only put so much of that on the pick six. The reality is that of their 13 meaningful possessions, 7 either spanned under 7 minutes or failed to earn a first down, if not both.

But of those 38 pass attempts, Diontae Johnson got 12 of them. Pat Freiermuth got 10 of them. And Trubisky has a history of throwing to his tight ends going back to his days in Chicago. So could we realistically envision the second-year tight end as somewhat regularly seeing approximately 10 targets per game?

Obviously that’s going to vary game to game, but it’s not as though there aren’t a number of tight ends around the league who see heavy-volume targets. Most of those are glorified wide receivers, which Freiermuth is not, but he works those soft zones and finds the holes.

If they can start working him vertically more, which signs this offseason point to, that could open another area of targets for him. The fact that he is perhaps the most reliable catcher of the ball on the roster also doesn’t hurt his chances of being a regular high-volume option with Trubisky under center.