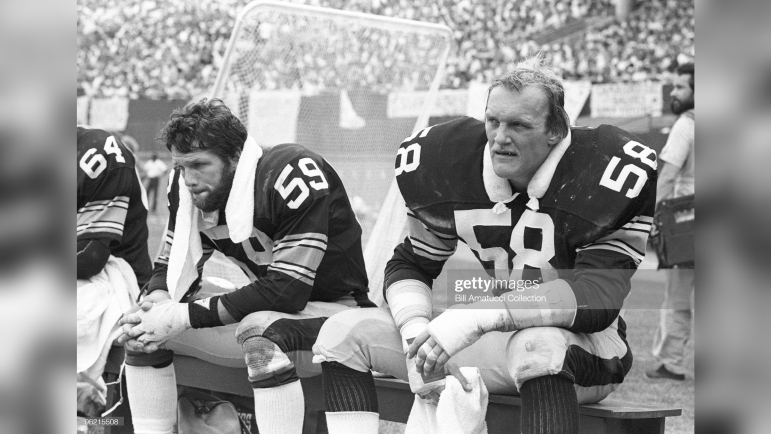 Question: Where do you draw the line on retiring numbers?

This question might not be everybody’s cup of tea today as the Steelers prepare for their season opener, but it is topical in the wake of the team’s announcement that they were retiring Franco Harris’ number. And please, just bear with me if you’re not interested in the question. We’ve got a long season ahead of us.

Prior to Joe Greene’s number being retired, the only retired number was Ernie Stautner’s 70, and that was all the way back in 1964. Greene’s number was retired in 2014, a full five decades later. Now with Harris joining him eight years later (has it really been that long already?), it does pose the question, where’s the line?

I made the argument that Terry Bradshaw’s jersey must be retired now. But how much further does it go beyond that? The Steelers already have a good amount of numbers that they do keep out of circulation. I don’t have a full list of the top of my head, but you’re not likely to see anybody wearing Jack Ham’s number, or Jerome Bettis’, or Troy Polamalu’s. And you’re sure never going to see another No. 7 issued.

What factors do you have to take into consideration when weighing whether or not to formally and officially retire a number? It starts with how important the distinction is between formal and informal retirement, the latter of which the team has long practiced. Some think that is a number is so revered that the team doesn’t issue it, then it makes no sense not to officially retire it, and there’s certainly logic there.

For a franchise as storied as the Steelers, you’re obviously not going to feasibly retire the number of every great player in the team’s history, let alone all of the Hall of Famers. Alan Faneca’s number won’t be retired, for example, or John Stallworth’s, or Dermontti Dawson’s, although that’s in part due to the practicalities of the positional number traditions.

Like I said in response to a couple of comments yesterday, I really don’t know where to draw the line, though I might skew toward conservatism. After 12, I see, eventually, 7. But who else? Who in between? 43, maybe? 36? Many suggested Mel Blount’s 47. There will be plenty of favoritism for the Jacks. I’m certainly not going to argue against such players meriting the honor, but there is the discussion to be had—even if it likely won’t come up for another eight years or more.

I do think, however, and strongly, that Terry Bradshaw’s number should be retired, and relatively soon. He absolutely should be able to be present to see it. There’s no need for an arbitrary period of separation between retirement ceremonies. Let the man enjoy the moment. Next year? 2025? I don’t know, but don’t keep him waiting too long. Posthumous celebrations are a hell of a lot less fun.