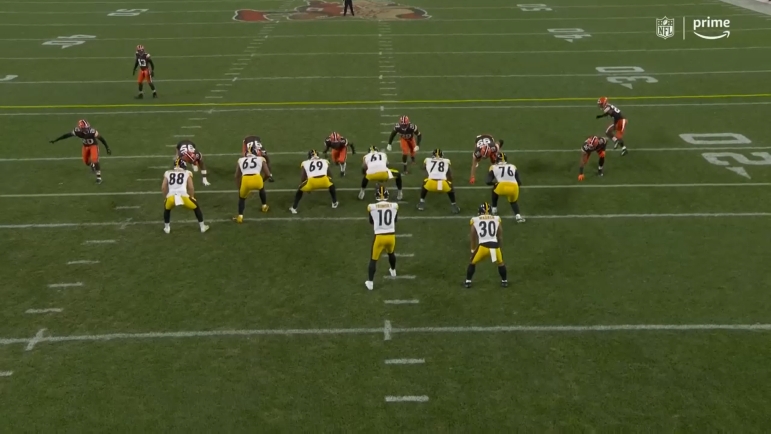 Question: Are the Steelers putting enough faith in their offensive line?

The Steelers faithful spent the offseason, training camp, and the preseason wringing their hands over the state of the offensive line, but now three games into the regular season, it has arguably been the strongest position group on the offensive side of the ball.

While there is certainly still room for growth, we are seeing that growth, the only question being how much more there is left to grow. The Steelers have allowed few sacks, and most have frankly been on quarterback Mitch Trubisky with his tendency to roll into pressure and to seemingly overestimate his ability to escape when cornered out of the pocket instead of throwing the ball away.

As far as run blocking goes, there has been steady progress in this area, though not without peaks and valleys. There have been some dominant plays in which every single lineman buries their blocks, but it doesn’t always finish that way. On Thursday, they did average 4.7 yards per carry, despite having no run longer than 11 yards.

Coming out of something of a mini-bye, is it time for the coaching staff to demonstrate their confidence and faith in the offensive line by calling plays that put more pressure on them to perform but which, if they do their job, expand the offensive menu considerably?

As it is, although we did see some expansion in the last game, this offense as it is structured schematically remains too limited, and not by necessity. There is certainly more in Matt Canada’s bag than he has shown at this point. It’s probably time that he does.

And if it’s about Trubisky at quarterback, then there’s no reason for him to be starting. They could be running this same offense with Kenny Pickett in there. We’ve already seen that there’s no reason Pickett would be fearing for his life behind this line based on how the unit has performed in pass protection the first three weeks, and frankly, he did a better job of standing in the pocket and delivering throws under pressure during the preseason than Trubisky has.