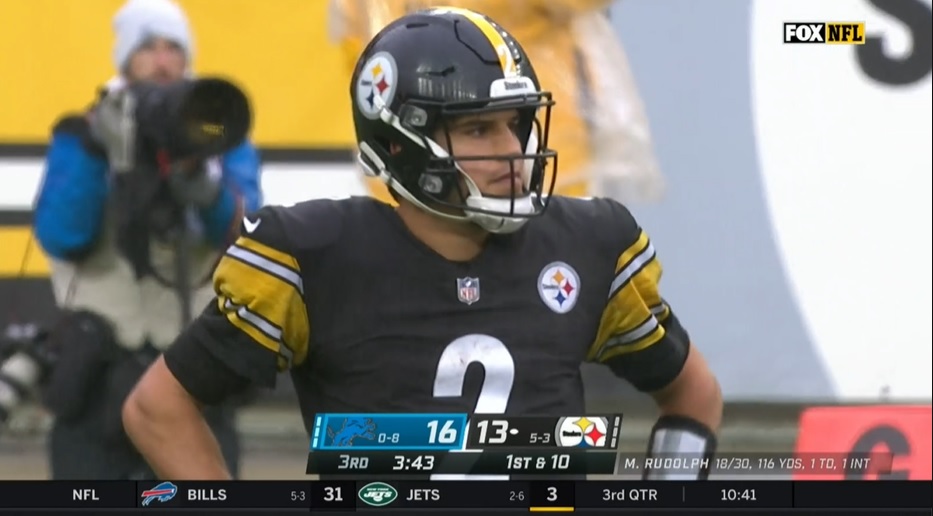 In just a few hours, the Pittsburgh Steelers will kick off against the Detroit Lions in the preseason finale as NFL roster will undergo cutdowns and reduce their roster sizes to the league-mandated 53 players by Tuesday afternoon. Many players on the backend of the roster will be playing for their NFL futures while one Pittsburgh Steeler in particular may be playing for his future on another NFL franchise.

This player is none other than QB Mason Rudolph who has been at the forefront of trade speculation throughout the summer. After the Steelers signed Mitch Trubisky and drafted Kenny Pickett, the writing appeared to be on the wall regarding Rudolph’s outlook with the team beyond 2022. While he was given the opportunity to compete with the other two QBs on the roster for the starting job, it appears that Rudolph has been phased out of the running despite having a successful training camp and preseason thus far. He was Pittsburgh’s most consistent option in training camp practices and went 26/36 (72.2%) for 220 yards and two TDs in his first two preseason games.

Needless to say, Rudolph has met and likely exceeded expectations that were put on him heading into the 2022 season as one of the better backups in the league and a guy that can spot start for you and represent himself well holding a 5-4-1 record as a starting QB. Still, it appears that Pittsburgh may be willing to move off Rudolph for the right price based on a recent report from Ian Rapoport that Rudolph is indeed drawing trade interest from around the league.

I posted an article a while ago headlining several potential trade destinations and packages for Rudolph should he get dealt, one of which being the Los Angeles Rams who Alex Kozora made a compelling case for in a recent post due to all the dots connecting Rudolph to the team.  The Detroit Lions also are another potential destination for Rudolph via trade given the state of their shaky QB room behind stater Jared Goff as well as HC Dan Campbell’s recent comments about hoping one of their guys “takes the reins” regarding the backup QB job. Rudolph would be a good scheme fit behind both Goff and Stafford and would represent a clear upgrade over what either team currently has in-house.

GM Omar Khan said a while back that they would field calls but wouldn’t go out of their way to try and deal one of their three QBs on the roster. That makes sense as if you are the one seeking out a trade, the other team likely can capitalize and ask for less in return if you are adamant about getting a deal done. However, it appears that other teams are the ones sending calls to Khan and the front office, and they will have to decide whether if a trade package is enticing enough to move off of Rudolph who is in the final year of his contract.

Ultimately, a trade may not surface, and Rudolph could end up on the roster for the entire season. However, the drumbeat pointing to a trade has gotten louder by the passing day and should Rudolph cap off his impressive preseason with another strong performance against the Lions, Rudolph may play his way onto another roster by the end of the week for a team that want to go get him.