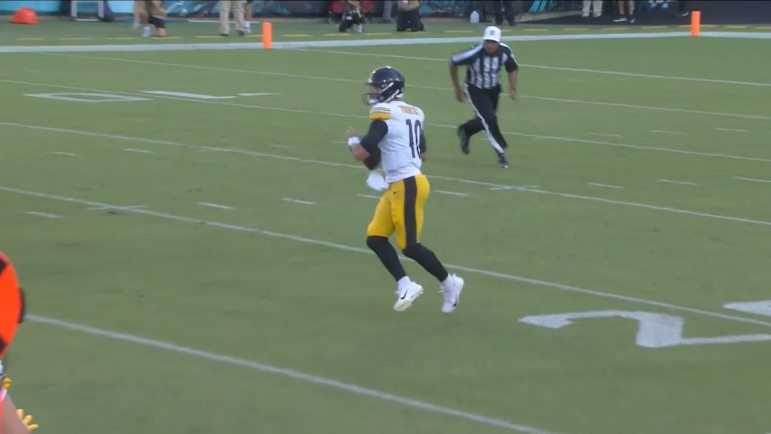 Following the Pittsburgh Steelers 19-9 win over the Detroit Lions in the team’s third and final preseason game, quarterback Mitch Trubisky talked to the media about taking shots downfield on offense.

“We’re gonna be aggressive. We like our playmakers inside and out, so when we get matched up one-on-one, we like to take advantage of those. Down the field, I thought we hit the one early to Diontae, and I think we could’ve had a couple more. I threw a back shoulder one, I think in the two minute drive to Pickens, and then I thought the one I put over the top, he almost made a great one-handed grab, but I tried to tell him to get two on it,” Trubisky said via the team’s YouTube channel.

Under Ben Roethlisberger, the Steelers weren’t able to take as many effective shots down the field the past few years. While they tried, Roethlisberger’s arm strength wasn’t what it used to be and it resulted in a lot of rainbow 50-50 balls that often didn’t end up in the Steelers favor. You can debate the merits of what Roethlisberger provided vs. what Trubisky will provide, but I think Trubisky has a better deep ball and that part of his game will be really beneficial to the Steelers.

Besides the 38-yard completion to Diontae Johnson that Trubisky talked about, he also had a 22-yard completion to Pickens and a 32-yard completion to tight end Pat Freiermuth down the seam that set up Pittsburgh’s lone touchdown, a six-yard strike by Trubisky to WR Steven Sims Jr. In the modern NFL, the deep ball has more value than ever, and Pittsburgh can actually have it be a legitimate part of their offense this year with Trubisky under center. There’s definitely a lot of potential for the Steelers’ aerial attack to be improved from what it’s been the last few years.

One of the problems with the deep ball is having the necessary time to throw it. While Trubisky’s ability to use his legs will help in that department, the offensive line being as bad as it currently is could prevent Pittsburgh’s offense from reaching it’s full potential, especially when it comes to taking shots downfield. Along with Roethlisberger’s diminished arm strength, that was a big reason why the team hasn’t had a ton of success throwing the ball deep over the past few years. Trubisky’s mobility might allow for a few more shots than they’ve been able to take, but for it to truly become a weapon, the offensive line absolutely has to better.

That two-minute drill from Trubisky today was definitely promising though, and if he provides more of that as Pittsburgh’s likely starter, the team will be just fine. Hopefully, the line holds up enough for Trubisky and the rest of the offense to be able to reach their full potential. If that happens, look for this offense to be a lot more fun to watch than it has been over the past few seasons.