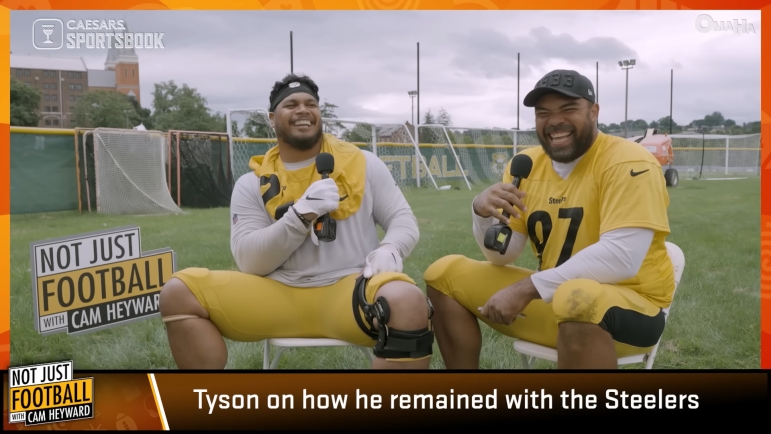 The Pittsburgh Steelers lost Tyson Alualu to a broken ankle early in the 2021 regular season. But they nearly lost him in free agency half a year before that. The 35-year-old veteran had agreed to terms on a deal to go back to the Jacksonville Jaguars, the team that drafted him more than a decade ago, but eventually had a change of heart and decided to re-sign with Pittsburgh.

He hopped onto Cameron Heyward’s podcast, Not Just Football, to chat for a bit, and they talked about how he nearly went back to Jacksonville, whom the Steelers will play tonight, and they approached it in a lighthearted manner, even though it was a major life choice at the time.

“That was a tough situation, mainly because Cam kept calling me”, Alualu said with a laugh, “so maybe the Jaguar fans, the organization should get mad at him for how everything went down. But in all honesty, I’m glad to still be a Steeler and I’m glad that I’m still here playing with the people that I love and for a great organization”.

A top-10 pick back in 2010, Alualu spent his first seven seasons in Jacksonville before signing with the Steelers as an unrestricted free agent in 2017. He has remained with the team since, and moved into the starting nose tackle role as of 2020.

He drew positive reviews for his play at the position that year, stepping into big shoes after Javon Hargrave left in free agency, but without him for most of the season, the Steelers’ run defense tanked, allowing at least 93 yards in every game in which he didn’t play, and over 200 yards four times.

Alualu had no difficulty blending in perfectly to the Steelers’ locker room, where he’s forged lifelong bonds with the likes of Heyward in particular. The group lost a dear friend with Stephon Tuitt retiring this offseason, at least on the field, but they continue to be there for him in his post-football life.

Now in his mid-30s, it is uncertain how much longer Alualu will play, but he knows he has this year in him, after having had very healthy career up until his ankle injury last year. Yet he had a knee issue that had him on the Physically Unable to Perform List to open camp this year, which he said dated back to OTAs.

One can only hope that he makes it through the season healthy and is able to play up to his usual high standards as the best run defender on the team. The Steelers had to do without their best run defenders on all three levels last season—the others being Vince Williams, who retired, and Mike Hilton, who left in free agency—so getting one of them back is a small glimmer of hope.