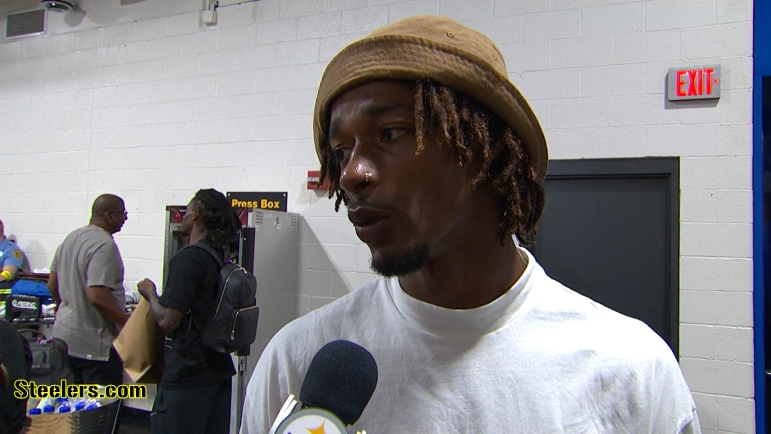 Tyler Vaughns caught the game-winning touchdown from Kenny Pickett for the Pittsburgh Steelers and scored with just three seconds remaining in Saturday night’s preseason debut. It wasn’t intended that he would score on the play, but he saw the opportunity and capitalized it.

That is what the whole play was about, indeed, right from the design. As both he and Pickett talked about after the game, they saw the defense from the Seattle Seahawks that they wanted to see and matched up against it.

“We were just waiting for our little keys, little downs. We got the concepts that wanted and we just executed”, Vaughns told Missi Matthews for the team’s website, then referenced head coach Mike Tomlin in explaining the planning behind the execution. “What Coach talks about, winning on the sideline”.

What he means by winning from the sideline, of course, is utilizing your coaching and scouting resources to strategically outmaneuver your opponent and take advantage of the openings that they present. The play, a 10-yard out, was designed to set up an easier field goal opportunity for Nick Sciba, but Vaughns saw the opportunity to safely spin out of the tackle attempt, knowing the Steelers still had a timeout, and broke out for a touchdown.

“Just trying to showcase my skills and how I can do anything on the field”, he told Matthews when asked what that play and his overall performance meant for him and what he was trying to put on film. Certainly, a game-winning touchdown that makes use of situational football knowledge doesn’t hurt.

A former college free agent out of USC last season, Vaughns signed to the Steelers’ practice squad on September 7 after spending the summer with the Indianapolis Colts and getting cut. He would spend the rest of the year in Pittsburgh, barring a couple of short-term roster-juggling moves in January, and remains on the 90-man roster.

Indeed, he is said to have had a good training camp, his first with the team, and he was able to translate that into the stadium, finishing the game with two catches for 32 yards and the score, and also showing a willingness to block.

At 6’2”, he has intriguing height, but the Steelers’ wide receiver room is already crowded, with Diontae Johnson, Chase Claypool, and rookie George Pickens at the top. In addition to Gunner Olszewski and another rookie, Calvin Austin III, a trio of veterans, Miles Boykin, Anthony Miller, and Steven Sims, are all vying for just two or three roster spots.

It is not uncommon for us to see wide receivers excel in preseason games but fail to make the cut. Part of it is just the amount of talent there is in the league at the position. Part of it is third-string defenses with no gameplan. But catching a game-winning touchdown probably hasn’t ever hurt anybody’s roster chances.