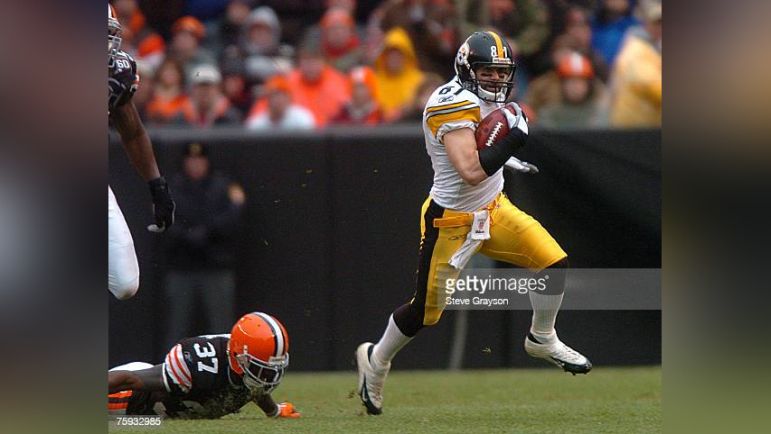 I’ll start by apologizing in advance on two fronts. One, for sharing an article nearly a month old, and two, for missing this article in the first place. There’s nothing better than talking about special teams and special-teamers, and few enjoy it as much as Rick Gosselin. In an updated article last month, he put together a list of the 53 greatest special teamers in history, everyone from kickers and punters to gunners and upbacks on the punt team.

Of the 53 chosen, two former Pittsburgh Steelers made the list – RB Fred McAfee and WR Sean Morey. Here’s what Gosselin wrote on both.

“A special-teams captain for both the Saints and Steelers, McAfee collected 210 career tackles in the kicking game with six fumble recoveries and two forced fumbles. He posted a career-best 30 of those tackles in 2005 with the Saints. He also recovered a blocked punt for a Pittsburgh touchdown in a game against Kansas City in 1998 and ran a fake punt 53 yards for the Saints in a 2004 game against Minnesota.”

McAfee began and ended his NFL career with the Saints, spending ten years with the team, but saw the middle portion of his career land in Pittsburgh. He saw some work as a runner in 1995 with the Steelers but spent most of his time as a core special-teamer, and as Gosselin mentioned, becoming a captain of that unit. McAfee played through his age-38 season, spending nearly all of it on special teams and making him one of the longest-tenured third-phase players in NFL history.

Here’s a look at the blocked punt he recovered for a touchdown that Gosselin mentioned. Lance Brown blocked it, McAfee recovered it for the score.

McAfee was listed as a general “coverage” player on Gosselin’s roster. A spot that sure seems well-deserved.

“Morey served as a special-teams captain for both Pittsburgh and Arizona. He collected 151 career tackles in the kicking game, including a career-best 28 with the Eagles in 2003. Where Morey played, winning followed. He played in an NFC championship game with the Eagles and Super Bowls with both the Steelers and Cardinals. He blocked a punt in overtime in a 2008 game against the Cowboys that was returned by Monty Biesel for a touchdown – the only time in NFL history a game ended on a blocked punt. Morey also has a 76-yard kickoff return to his credit and a 13-yard rush on a fake punt.”

Morey wasn’t in Pittsburgh for a long time, far less than what I remembered, but he was there for a good time. An undersized receiver from Brown, Morey posted 44 tackles – 33 solo – in three years with the Steelers. He helped the Steelers win Super Bowl XL and was part of a Pittsburgh unit that had several other quality special-teamers like CB Chidi Iwuoma and LB Clint Kriewaldt. Some NFL fans may remember him as the man Patrick Willis chased down in an overtime win against the Arizona Cardinals. We wrote more about Morey’s career back in 2018, including his post-NFL days of taking over one of college football’s sprint football programs.

Morey also was selected as part of the general coverage unit.

Of course, this list is missing a key name. Chidi Iwuoma. Arguably the Steelers’ best special teams player of the last 20 years, he’s nowhere to be found on Gosselin’s list. A tough group to crack, sure, but Iwuoma was arguably a better coverage player than Morey. A lack of longevity is the thing that hurt Iwuoma the most, his career ending before he was 30. But he averaged over one tackler per game, 85 of them in 77 games, a better ratio than Morey (98 tackles in 109 games). If you want to learn more about Iwuoma’s career, check out the video we made highlighting him earlier this offseason.

Other notable players on Gosselin’s list include: kicker Adam Vinatieri, punter Ray Guy, Steve Tasker in coverage, and John Lynch as a personal protector, where he cut his teeth before becoming a Hall of Fame safety. More obscure names include long snapper Steve DeOssie, widely considered the game’s first true snapper. But the list has a surprising number of household names like Ed Reed and Ted Hendricks on the field goal block team along with great return men like Devin Hester and Gale Sayers. Again, the whole list is worth checking out, and I’ll link it once more here.