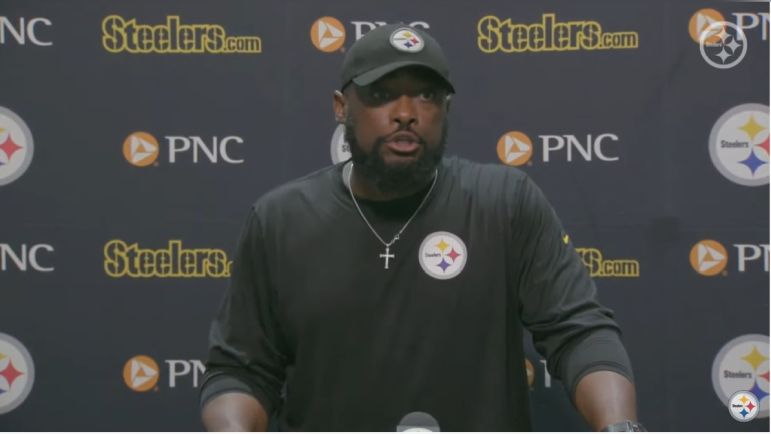 During Friday’s press conference, head coach Mike Tomlin mentioned to the media that he will be “light on his feet” when it comes to playing time in the Pittsburgh Steelers’ season finale against the Detroit Lions. As reported by Steelers website writer Teresa Varley, this pertains to most of the starters, including the offensive line.

Coach Tomlin said he will be light on his feet about how much time players will play vs. Detroit, including the offensive line.

It can be expected that guys like Najee Harris and Mitch Trubisky who are in line to start Week 1 won’t see much action as the team looks to evaluate the bottom of the roster as cutdowns approach early next week as well as avoid any unnecessary injuries to starters in exhibition play.

Still, it’s notable that Tomlin mentions the offensive line as a unit that may also get limited exposure in the preseason finale after the dreadful showing that they put on film last week Saturday against the Jacksonville Jaguars. The whole unit looked out of flux and overwhelmed by the Jacksonville defensive front, failing to establish any sense of a running game while having Mitch Trubisky run for his life under constant pressure.

While it would be a loss to see a starter on the OL go down in the preseason finale, the unit arguably needs as many live reps as it can get in preseason action before the games count for real, starting with the division-rival Cincinnati Bengals come Week 1. You saw the coaching staff embrace this last week, leaving starters like LT Dan Moore Jr. and LG Kevin Dotson in the game well into the second half after starting off the game shaky.

The decision on how long to play the starting offensive line presents an interesting dichotomy worth monitoring come Sunday afternoon. On one hand, you don’t want to risk injury to one of your starters and force a player of an arguably lower talent level onto the field in their stead. On the other hand, most of the starters haven’t met the bar in terms of playing like an average offensive line, and they can use all the reps they can get together as a unit to gel and apply OL coach Pat Meyer’s teachings in live action. Either way, Pittsburgh will look to rebound up front against the Lions to end the preseason on a high note.