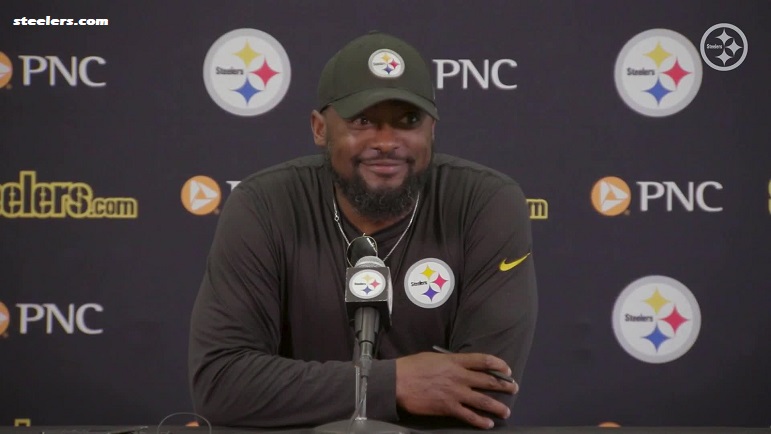 The Pittsburgh Steelers will open their 2022 preseason schedule Saturday night at Acrisure Stadium against the Seattle Seahawks, and thus the presumed starting quarterback battle will move into the next phase of the summer. Steelers head coach Mike Tomlin has indicated all along that the starting quarterback job will be a competition this summer, and as the team transitions from nothing but training camp practices into preseason games, he’s still insisting that nothing has been decided

In a recent interview with Bob Labriola of Steelers.com ahead of the team’s preseason opener against the Seahawks, Tomlin was asked if he needs to make a starting quarterback decision before the end of the preseason.

“I think it will reveal itself,” Tomlin said. “You know, it’s not a decision to be made by me or others. It’s a decision to be made by them and their play. All we have to do is sort out what it is that we see. That’s the mentality that I bring to it, and that’s the mentality that I want them to have. I want them to know that these are not mystical decisions. These are concrete, tangible decisions that are borne out of performance and the quality of those performances.

“And so, I don’t want them rubbing a lucky rabbit’s foot and things of that nature. I just want them playing well, and the quality of that play is going to determine what happens moving forward.”

While Tomlin claims that he has not yet decided on a starting quarterback to open 2022 season, he did have to decide which one would start the Saturday night preseason opener and what the order will be against the Seahawks. He announced on Thursday that he had decided that Mitch Trubisky will start Saturday night against the Seahawks and that he will be followed by Mason Rudolph, then rookie Kenny Pickett. That decision comes on the heels of that being the team’s quarterback rotation from the start of training camp until now.

So, with Trubisky being the top quarterback in the rotation all throughout the offseason, does that mean that it’s his job to lose during the preseason?

“No, that just indicates that was the premise that we chose to start with,” Tomlin told Labriola. “You have to start somewhere, and I was very transparent and open with these guys. Mitch has the most established professional football resume among the group, and so I just thought that was respectful and appropriate in terms of beginning. Mason is second, and obviously Kenny doesn’t have a professional resume to speak of.

“So that’s the premise in which we begin and have begun this process. I meant what I said when I said I wasn’t going to be blowing in the wind in terms of the reps, that the depth chart doesn’t ride on every throw. I think you cut their leadership legs out from under them when you have that mentality. And so, we’re going through this process, and the quality of the play, particularly in-stadium, will determine how it unfolds moving forward.”

Tomlin’s response sounds great when you read it or hear it but even so, it’s hard to imagine that this isn’t very much Trubisky’s job to lose during the preseason. After all, the Steelers signed the former first-round draft pick of the Chicago Bears to a two-year, $14.25 million contract right at the start of free agency, well before the team selected Kenny Pickett at 20th overall in the first round of the 2022 NFL Draft. Sure, Tomlin and company might be open to going a different direction should Trubisky fall on his face during the preseason, but it seems like that will be exactly what it will take for him to not be the team’s Week 1 starter on the road against the Cincinnati Bengals.

While Pickett might techincally be involved in the starting quarterback competition this summer, it’s hard to imagine him winning it prior to Week 1. It seems like for him to open the 2022 regular season as the starter that it would take both Trubisky and Rudolph getting hurt. I don’t believe that Tomlin has any intentions of letting Pickett win the job no matter how well he plays during the preseason. I just don’t.

Whatever you make of Tomlin’s most recent comments to Labriola, there are still three preseason games to watch before Week 1 rolls around, with the first of them being Saturday night. It will be fun to watch all three quarterbacks play against the Seahawks, regardless of when each plays. Rest assured, however, that one quarterback will exit Saturday night as having had the best performance of the three with one of them being deemed as having had the worst.

It will be interesting to see if the Trubisky’s Saturday night performance is deemed by the masses as being anything but the best of the three quarterbacks. If his play Saturday night winds up easily being deemed as the worst of the three quarterbacks, it will then be interesting to see if Tomlin keeps the rotation the same in the team’s second preseason game. Based on what Tomlin has indicated all offseason, I wouldn’t expect the preseason order to change before Week 1 regardless of how each plays under the stadium lights in these next three exhibition contests.