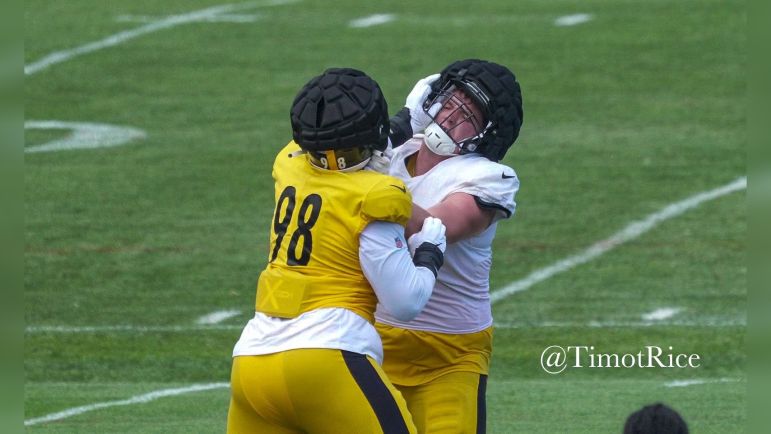 First-round pick QB Kenny Pickett and second-round selection WR George Pickens have consumed all the rookie headlines this summer. Understandably so – Pickett is the team’s first first-round quarterback since 2004, while Pickens is a first-round talent Pittsburgh stole in the second round. Both have gotten the fanfare for good and valid reasons. But the Steelers’ rookie class didn’t stop there. And guys behind the top two picks are making an impact, too. Speaking with Steelers.com’s Bob Labriola, Mike Tomlin praised the job third round defensive lineman DeMarvin Leal has done.

“I was impressed with what Leal did between the spring and camp in terms of his conditioning,” Tomlin told Labriola for the team website. “You could tell that he was working extremely hard, and he came back ready, and that’s a great platform from which to begin.”

Once considered a potential first-round pick entering his senior season, Leal’s stock curiously dropped last fall despite an increase in overall production. Labeled a tweener, he fell to the third round before the Steelers nabbed him 84th overall. Too light to play on the team’s front, Leal bulked up roughly 20 pounds during the offseason, going from 280 to about 300 pounds.

Despite the calorie-packing, Leal has maintained his quickness and pass rush ability, his best trait coming out of Texas A&M. His cross chop has been particularly effective this summer. As Tomlin notes, conditoning is the most important trait a player can have and Leal has been healthy and available to soak up every rep possible this summer.

Tomlin was also quick to point out the great group of players mentoring him.

“He’s growing and learning every day. He’s in a veteran group, around guys like Cam [Heyward] and Chris Wormley and Larry Ogunjobi, so he’s getting that type of tutelage.”

It’s a wealth of experience along the Steelers’ defensive line. Heyward is a team leader and top mentor, and he’d often pull Leal aside to go over something, especially in 1v1 OL/DL drills. Leal will have to prove he can anchor against the run but he looks more developed than perhaps anticipated for a guy making the transition to full-time interior defensive line. He’s seen work as the LDE in the team’s base defense but could function best in sub-packages as a three-tech.

The good news is Pittsburgh’s defensive line room is ultra-deep, with seven likely to be kept on the 53-man roster, meaning Leal won’t have to be pressed into action. Of course, if he earns the playing time, the Steelers’ front will be even stronger. With Chris Wormley and Larry Ogunjobi set to be free agents after the season, not to mention Tyson Alualu’s likely retirement, a foundational rookie season could set Leal up for a big role in 2023.